Invented Languages | Why We Create Them and How They Are Used 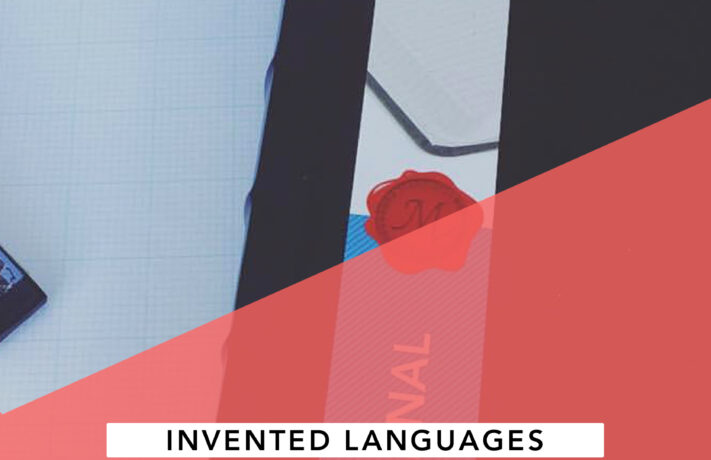 When I first started to get into learning languages as a kid, I, like may others before me, was struck with the idea of creating my very own language. It seemed like a brilliant idea because not only would it keep my diaries secret from prying eyes, but it would be a fun project.

I spent about a day creating my language. It was quite simple, but I was pretty proud of it at the time. My interest in it, however, only lasted another day or two after its creation.

While I, personally, no longer have any interest in inventing my own languages, I still greatly admire those that have spent the time developing them.

What are Constructed Languages

Constructed languages, or conlangs for short, are languages that have been “consciously devised” rather than having naturally developed. This basically means that an individual or a group of people took the time to develop, or construct, a new phonology, grammar, and vocabulary, thus, inventing a new language.

Constructed languages can typically be divided into three separate categories:

The first known constructed language is Lingua Ignota, which was a mystical language recorded by Hildegard of Bingen in the 12th century. Historically, mystical, magical, religious, and philosophical invented languages were quite popular, but it wasn’t really until the 19th and 20th century that languages that served more broad purposes really started to gain traction. It was also around this time that art languages, such as Tolkien’s elvish languages, became popular through works of fiction.

Like many, I have mixed feelings about invented languages. While I admire those who have the skill to develop a language, I am often haunted by the question, “but why?”, even if I try to keep myself from asking it.

It’s a question that I really shake my head at asking because as a language learner, it’s something that I’m often asked and that I don’t really like having to answer – “But why are you learning Croatian? You’ll never use it.” or “Why are you learning so many languages? You should just focus on one or two.”

So when I find myself asking, “But why would someone create another language when we already have so many that are already used by speakers around the world or that are endangered and that need to be preserved?” I almost immediately want to withdraw the question. I myself have been asked something similar about the natural languages I’ve chosen to learn far too often.

I know there are those out there that see learning an invented language as a waste of time while there are others who invest years of their lives into either learning or developing a conlang. What I believe it all comes down to are – as I often say regarding most language learning related things – your goals and interests. Whether or not learning or creating a conlang is a waste of time or not is a personal decision that only YOU alone can make. And as long as it’s something you enjoy, then in my opinion, that’s really all that matters. As Arika Okrent said, “To each his own passion. To each his own time to waste.”

And to end this section with yet another brilliant quote from Arika Okrent;

“Reviving endangered languages is a worthwhile and important cause. But I don’t think making up new ones necessarily hurts that cause. There is no general pool of effort from which all endeavors are drawn. Time spent in one pursuit is not time taken a way from another if the person spending that time has no interest in that other pursuit. I should note, though, that many language inventors, at least the ones who do it for artistic purposes, are intensely interested in “exotic” or less frequently studied languages, and, looking for inspiration and grammatical ideas, they end up studying Manx, Cornish, Oneida or any number of endangered languages. Additionally, Esperantists, because of their internationalist disposition and concern for language equality, often study minority languages as well. When a typical Esperantist plans a trip to Spain, he doesn’t bring a Spanish phrasebook, he packs a Basque one.” source

Why Do We Create New Languages?

To remove any vagueness or ambiguity in the way we speak // Languages like Esperanto and Ithkuil were invented to create more effective or direct means to communicate.

To experiment // Languages are sometimes invented to experiment certain concepts and ideas about language in a variety of fields.

To have fun // Sometimes languages are created for the enjoyment of the creation process.

To challenge oneself intellectually // Some conlangers create languages to challenge themselves with questions like “what would a language spoken with a nonhuman anatomy sound like?”

Can a Language Lose Its Status as “Constructed” and Become a “Natural” Language?

I was quite surprised to find that the answer to this question is an astounding yes! Constructed languages that find themselves with a community of native speakers begin to evolve on their own and can lose their “constructed” status.

An interesting (although highly debated) example of this is actually Modern Hebrew which was once a constructed language modeled on Biblical Hebrew. Esperanto is quickly becoming another.

Toki Pona // Invented in 2001 by Sonja Lang, Toki Pona was an attempt to “express the meaning of life in 120 words”. Since it’s rise in popularity amongst language learners, words have been added to the language by those who have learnt it, but it maintains its minimalistic spirit. It is said there are currently about 100 speakers of Toki Pona. The language is used amongst them to achieve simplicity in communication not possible with other languages.

Esperanto // Esperanto is not only one of the best known invented languages, but it is also one of the most widely spoken worldwide. It is also one of the few constructed languages that has native speakers (usually where the parents of a child both speak the language fluently and choose to use it with their children as a first language). It was invented by Polish doctor, Ludovic Zamenhof, in the 19th century to give humanity a common language that would be simple to learn. Today, it is used by many language learners as a “gateway” language because it can be learnt relatively quickly and that learning process can then be applied to learning additional languages. The language can also be heard in the film Gattaca.

Klingon // The language of the Klingons from the Star Trek universe. Klingon was developed by Marc Okrand. d’Armond Speers, a computational linguist attempted to teach his son Klingon as a native language, but the child ended up rejecting the language, preferring English for its wider uses. There is currently a Christmas play that is almost entirely in Klingon and an opera that is only in Klingon. There are also several notable literary works such as Hamlet and The Epic of Gilgamesh which have been translated into the language.

The Klingon Dictionary | Klingon for the Galactic Traveler

Dothraki // Created for the book series “A Song of Ice and Fire” by George R. R. Martin and then more fully developed for the tv series “A Game of Thrones” by David J. Peterson is Dothraki, a language spoken by the inhabitants of the Dothraki Sea. The development of the language by Peterson faced two constraints: the first was that it needed to fit with the parts of the language already created by Martin within the books and the second was that it needed to be learnable by the actors in the television series. It has 23 consonant phonemes, four vowels, and four dipthongs.

Elvish // Elvish itself isn’t actually a language, but a branch of several created by Tolkien, one of which is Quenya (there’s also Common Eldarin, Sindarin and Goldogrin among others). Quenya is a ceremonial Elvish tongue and was invented by J.R.R. Tolkien in an attempt to design the most beautiful language in the world. He even went as far to create two dialects of the language, Vanyarin and Noldorin.

Navi // Navi was invented by USC professor Paul R. Frommer for the film Avatar. The language was developed over a period of several years and it had close to 1,000 words around the time the film was released in 2009. Frommer, however, has continued to develop the language since the release of the film and the vocabulary in the language has more than doubled. Frommer keeps a blog where he post updates and additions to the language. Learn Navi

Nadsat // Nadsat is a form of Russian-influenced English used by the teenaged characters in Anthony Burgess’ “A Clockwork Orange”. Burgess himself was a polyglot and had an affinity for languages which is exemplified by his creation of Nadsat. It might be argued that Nadsat is not a language but a fictional dialect of English used by teens in the book. While this might be the case, the differences between what defines a language and what defines a dialect is often debated, so I’ll leave it to you to decide whether Nadsat is a language or a dialect.

Dovahzul // This would probably not make it into the Top 10 invented languages list elsewhere, but I wanted to include it because it’s the only language on this list that was invented for a video game series. Dovahzul was created for the Elder Scrolls video game series, but it has since been further developed by fans of the games. The writing system is influenced by cuneiform and was designed to look like claw marks on stone.

Earlier this year, I announced that one of my goals was to learn a conlang. I didn’t say which I planned on learning during my original announcement, so I found myself receiving unsolicited suggestions for resources that would help me learn Esperanto (one of the most popular and arguably most practical invented languages to learn).

Unfortunately, Esperanto is not the language that I’ll be learning. But I’d still like to thank those of you who kindly took the time to recommend resources to me.

Instead, I thought that if I were really to go all out and learn a conlang, that I should ensure it’s something I’d have quite a bit of fun with and so I’ve decided to learn a bit of Dothraki.

Yes, I know that there is no practical use for the language. And no, I don’t even watch the tv series. But, I do love the books and that was enough of a reason for me. Plus, I kind of like the way that it sounds (based on the audio clips I’ve heard thus far).

Once I spend some time going through the resources that I have, it’s very likely that I won’t make an effort to maintain the language. For me, this is just a fun project to try out this year and a way for me to enjoy the world created by George R.R. Martin (even if its Peterson who invented the bulk of the language) while I wait for the next book to be released.

– The Language Construction Kit by Mark Rosenfelder
– The Art of Language Invention by David J. Peterson
– In the Land of Invented Languages by Arika Okrent
– From Elvish to Klingon by Michael Adams
– An Interview with Arika Okrent an Paul Frommer