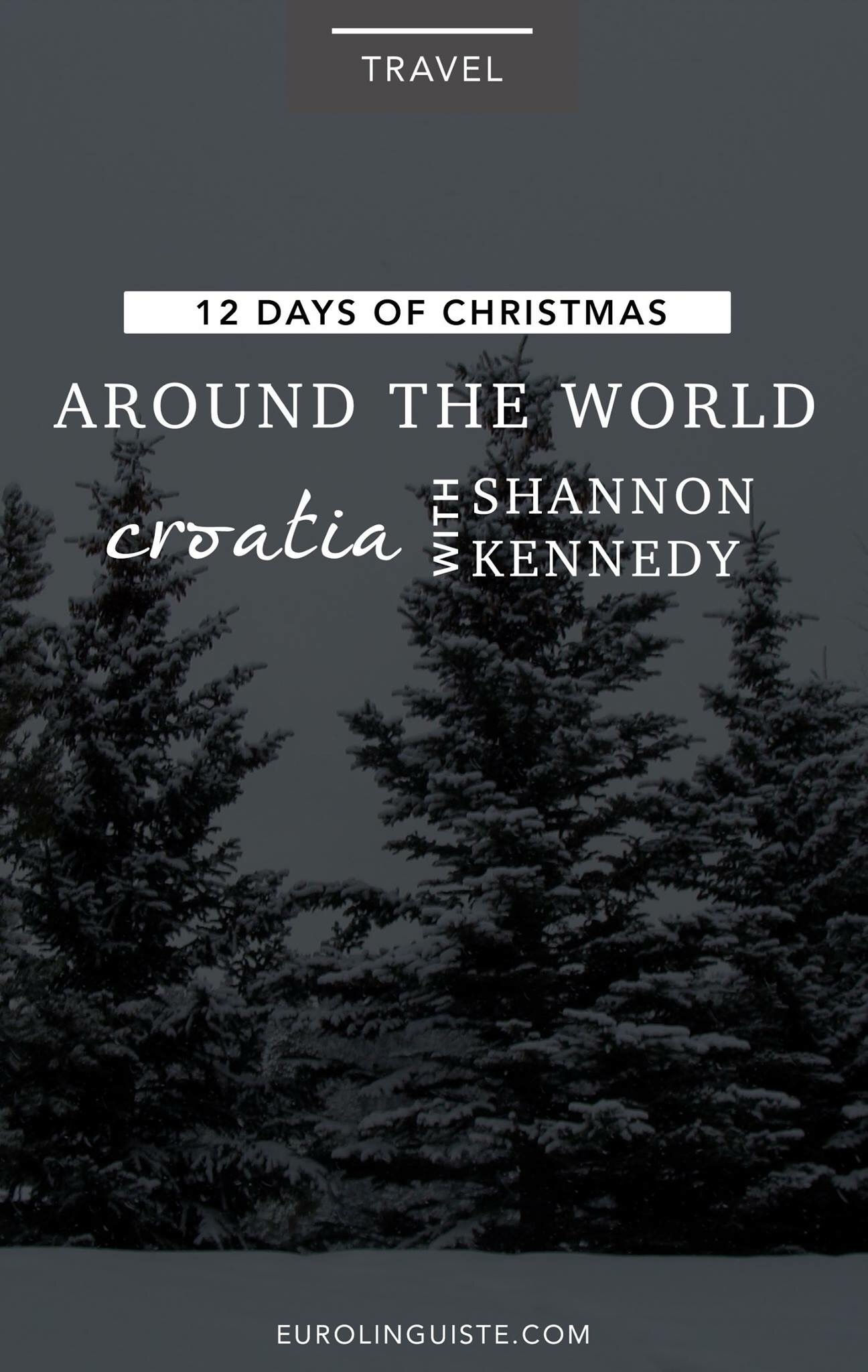 It’s officially day three of the 12 Days of Christmas Around the World, and this is my first contribution. I really wanted to have fun with this series of posts, in both researching my own articles and reading those of all of the awesome contributors who have teamed up with me, making the various recipes and sharing them with you all.

I was initially going to write my posts on the countries within which I have experienced Christmas, but I thought I could make it a much better learning experience by researching how Christmas is celebrated in a country I’m unfamiliar with.

And that’s why I chose Croatia.

You all likely know that I’ve studied the language and I have an affinity for Croatian culture, so I thought researching this post would be a really fun way to immerse myself in just that. And it was.

For those of you ever really looking to get into your language’s culture(s), I really recommend picking a holiday – especially one unique to the country – to get started. You get to learn about so many things about the country’s culture – various traditions, foods, ways to celebrate, relationships, and so much more.

So without running on and on any further, I now present to you, how Christmas is celebrated in Croatia.

The History of Christmas in Croatia

Croatia has historically been a largely Catholic country, and so, there are various traditions in practice around the country that reflect this. For example, in some homes, straw is scattered below the Christmas Eve dinner table to represent the stable within which Christ was born.

A tradition that I enjoyed discovering was that of sowing pšenica (wheat seeds) prior to Christmas, usually around St. Lucy’s day, in order to use the wheat to decorate during the holidays. The wheat, depending on how well it grows, predicts the success of one’s household the following year. Some families use a bit a fertilizer – it’s allowed – to encourage the wheat’s growth, while others accept it’s natural growth. At the end of Christmas, the wheat is left out for the birds rather than being thrown away.

Another practice that has quite a bit of history behind it, is that of placing a log on the fire and keeping it burning all through Christmas. While it isn’t in practice in more metropolitan areas, it is still a strong tradition in other areas and there is quite a bit of ceremony that surrounds it. For example, in Dalmatia, wine and grain are sprinkled over the wood while in Dubrovnik, it’s corn and wine. Either way, the log is lit and is kept burning from Christmas Eve through Christmas Day.

An interesting tradition for single young women, once again on St. Lucy’s Day, is to determine their future spouse using 12 small sheets of paper. According to Like Croatia, young women write the name of a young man with whom they are enamored on eleven of the sheets, leaving one blank. She is then to pick them up one-by-one, presumably at random, reading each aloud. The very last sheet she selects bears the name of her future husband, so if the sheet is blank, she is said to remain single for eternity.

In Croatia, rather than hang a stocking, many children place their shoes on a windowsill to be filled with treats. If the children weren’t well-behaved, they were likely told that Krampus, Santa Claus’ counterpart would fill them with switches that could be used.

How to Choose the Best Resources to Learn a New Language

Christmas trees are only relatively new to Croatia (they were introduced around the 19th century), but they have still made their way into Croatian Christmas tradition. Unlike many homes in the US (and likely elsewhere), trees aren’t decorated until Christmas Eve, so finding them early in the month is often difficult. They are often decorated with fruits, nuts, candies and other ornaments.

In Croatia, Santa Claus really isn’t a thing, at least not like he is in other countries (St. Nicholas and St. Lucy do “distribute” gifts to children depending on where they live on the country). Because Croatia is predominately Catholic, Christmas is more religious than it is commercial, so Jolly Old St. Nick isn’t as important for Croatian Christmas celebrations as he is elsewhere.

The Dough:
1 cup of milk
1 pkg vanilla sugar
1 tbsp yeast
2 large eggs (one for the egg wash and the other for the dough)
1 tsp salt
1/2 cup sugar
1/2 cup melted butter + 1 tsp
3.5 cups of white flour
The Filling:
2.5 cups of ground walnuts
1 cup of milk
2 tbsp honey
2 tbsp of plum jam (I used raspberry)
1 lemon’s worth of lemon zest
1 tbsp rum
2 tbsp butter In a large bowl, pour in 1 cup of warm milk, 1 pkg of vanilla sugar, and 1 tbsp of yeast. Set aside for ten minutes.
Add one large egg, 1 tsp of salt, 1/2 cup of sugar, 1/2 cup of melted butter, the lemon zest and 1 tsp of rum. Mix all ingredients. Add in 1.5 cups of white flour and mix. Slowly add in the remaining 2 cups, mixing until the flour pulls away from the bowl. Continue mixing until dough is smooth. Massage 1 tsp of warm butter over dough, return to bowl, cover with plastic wrap and allow to rise until doubled in size (about an hour).
While the dough is rising, prepare the filling. Warm one cup of milk in a sauce pan. Add in the 2.5 cups of ground walnuts, 2 tbsp of honey, 2 tbsp of jam, and lemon zest. Add in 3/4 cups of sugar and 1 tsp of cinnamon. Cook on low until mixture is thick like porridge. Add in 1 tbsp rum and 2 tbsp of butter. Place in a bowl and allow to cool in fridge.
Once dough is ready, split it into two equal halves. Roll out each piece into a rectangular shape, the thinner the better. Split the filling into two equal halves and spread out over the dough. Make sure that the longer side of the dough is facing towards you, then begin to roll the dough away from you. Brush a baking tray with oil so that the bread does not stick and lay the two rolls on the pan. Brush with an egg yolk wash.
Bake at 300F for twenty minutes uncovered and then another forty minutes covered with aluminum foil so that it does not burn. Remove from oven, allowing them to cool, and serve warm. Adapted from Chasing the Donkey

This post was researched, in part, with Culture Smart! Croatia. If you’re looking for a great series of books to introduce you to the culture of the area you’re studying, I highly recommend these guides. They’re a fantastic, compact introduction to the culture of numerous countries around the world and are one of my go to resources whenever I take on a new language or prepare to travel to a new place.

Can You Learn a Language by Watching TV Shows?