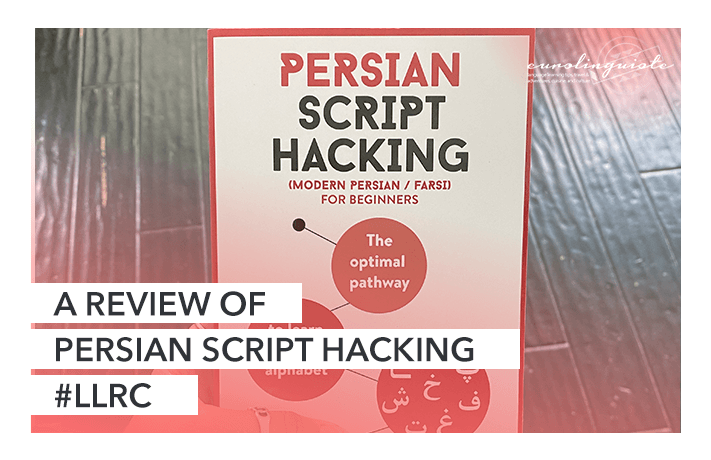 I recently started to learn Persian. Initially, I focused on the conversational approach, using romanization for my notes and flashcards. But I eventually hit a wall and found myself needing to finally tackle the Persian writing system.

I turned to my favorite go to for learning a new writing system, Scripts, but the writing system isn’t yet supported by the app. So, I went on a hunt for another resource and that’s when I discovered Script Hacking, a series of books by Judith Meyer.

If you want the quick version of this review, I highly recommend this series.

It helped me get comfortable with the Persian alphabet and I plan on picking up the books for other languages, too.

Read more if you want the full Script Hacking review.

What is Script Hacking?

Script Hacking is a series of books currently available for Persian, Hebrew, Greek, Korean, Russian, and Arabic. Hindi is releasing later this month.

It breaks down the writing system for these languages in a way that helps you quickly recognize each letter or character. It’s filled with exercises and reading practice so that you can gain confidence reading and writing in another language quickly.

My Thoughts on Script Hacking

I worked through Script Hacking cover to cover over a period of about two weeks. Within that period, I went from not knowing a single letter in the Persian alphabet to having the ability to read in the language. Slowly, of course, but the fact I was able to do it all — without the help of any other resource — speaks to the quality of the Script Hacking series.

In Script Hacking Persian, each letter is introduced one-by-one. You’re presented with a short paragraph with information on the letter and the different ways it’s written, depending on if it’s at the beginning of a word, the end of a word, the middle of a word, or on its own.

After this, you’re given a variety of exercises to help you gain confidence recognizing each of the letters. Plus, you can access audio for the book online so you can hear how everything sounds.

What I Liked Most About Script Hacking

There was one thing that stood out to me most about Script Hacking, and I’ll get to it in a moment, but first I’ll explain why I liked it so much.

A lot of language materials throw a lot of material at you early on. You’re given a new writing system, new vocabulary, and new grammar all at once and expected to sort it all out. It’s sometimes too much to handle.

Script Hacking doesn’t do that.

You learn to read the names of figures you’re aware of, places you’ve heard of, cognates, and other vocabulary you’ll already have a foothold in. You’re not dealing with too much at once. You’re asked to absorb just the right amount of information about the language so that it sticks.

What I Thought Could Be Better

There’s not much I thought could be better with Script Hacking. By the end of the book, after 32 letters, I found the exercises for each letter too similar and I found myself wanting to speed through the last third of the book. More variation in the exercises might benefit the learning experience with this book.

As I mentioned at the beginning of the article, I highly recommend this book series. In fact, I loved it so much I am looking forward to buying the other books in the series, particularly when I get back to Hebrew and Hindi.

I read this book as a part of the Language Learning Reading Challenge and Women in Language Book Club. The prompt for October was “a book written by a woman”. It worked out that Judith Meyer wrote a book about the language I’m learning that also covered a part of the language I needed desperate help with! If you’d like to join us, you can find the group on both Facebook and Goodreads.