A Beginner’s Guide to the Japanese Language 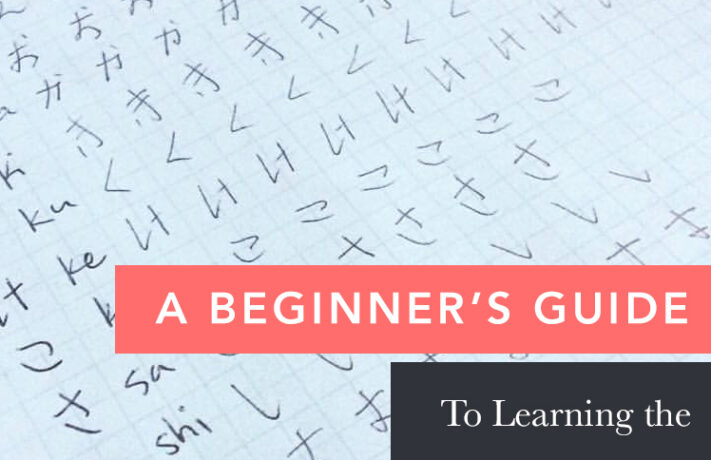 At first, learning Japanese can seem daunting. Not only do you need to learn three separate writing systems (four if you count romaji), but you have to deal with honorifics and particles.

Thankfully, there are several aspects of the Japanese language that aren’t nearly as challenging as your first impression may lead you to believe. Plus, there are a variety of high quality materials available to Japanese learners.

Having recently started studying Japanese, I’ve found myself evaluating a variety of resources and I wanted to share what’s working for me thus far.

Getting Started with the Japanese Language

Your motivation for learning Japanese may be one of any number of reasons. Some learn so that they can better understand the anime or manga that they enjoy, while others learn it to advance their careers.

Regardless of the reason behind why you’re taking on the Japanese language, you’re certain to find a number of areas you connect with. Whether it’s the rich music scene, the food culture, or booming economy, Japanese has a lot to offer.

Why Japanese Might Not Be as Hard as You Think

According to the Foreign Service Institute, Japanese is one of the hardest languages an English speaker could choose to learn. But rather than focus on why Japanese is hard, let’s take a look at why Japanese is easy.

Japanese has only two tenses – the present and the past.

These are often called non-past (present and future) and past. Context is usually used to determine anything more specific or to discuss the future. This is a nice number when other languages have you dealing with past, imperfect, subjunctive, or conditional tenses. None of those here!

You only need to worry about a limited number of irregular verbs.

And you can count these on two hands – at least those that you’ll use regularly. The two most common are to do する suru  and to come 来る kuru.

You don’t need to worry about learning the plural forms of words.

In Japanese, you use counters so you don’t have to worry about the plural forms of words.

You don’t need to worry about learning gender.

In many Romance languages, you have to learn the gender of each noun (and then modify the adjectives to match). In Italian the blue sea is il mare blu, in French la mer bleue, and the Spanish say el mar azul. In Japanese it’s simply aoi umi 青い海.

Pronunciation of Japanese is straightforward.

Japanese phonology (its sounds) is, compared to other languages, simple. Each syllable is only pronounced one way and there are only five basic vowel sounds. Plus, you don’t have to worry about stress. This means that each syllable is given the same amount of time or emphasis, so it isn’t aRIgato, arigaTO, or ariGAto, but arigato.

There are tons of English loanwords that are used in Japanese. And equally, lots of Japanese words we use in English. It’s just a matter of modifying the pronunciation slightly. Here are just a few:

Japanese is a pro-drop language.

That means that you can often drop the subject if “who” or “what” is apparent from the context of the conversation. So instead of saying “I’m learning Japanese”, you can just say “learning Japanese”.

You don’t have to worry about an insane number of conjugations.

In Japanese, the verb doesn’t need to agree with their respective subject. This means that instead of trying to figure out how to say I study, you study, he studies, she studies. We all 勉強する – benkyosuru. Instead, you can spend your time focusing on formal forms and tenses.

Tips for Getting Started with Japanese

Learn to introduce yourself and a few basic phrases to start speaking right away.

Speaking from the start is a great motivator because it gives you a quick win with the language. Even if it’s nothing more than “Hello! I’m ____. Nice to meet you!” Speaking Japanese can be hugely rewarding. Here are a few phrases to get you started.

Select a few materials to get started.

As I’ve mentioned in the past, this doesn’t need to be anything fancy. I highly recommend a course or course book of some sort because they offer structure. If you’re new to a language, this can be incredibly beneficial. I’ll list a few of the resources that I’m using below.

They each serve different functions and are a great way to start getting into reading and writing in the language. Plus, understanding how to read in a language also gives you a leg up on pronunciation. Why? Because romanization will never give you a 100% accurate representation of how the language sounds.

Find a way to practice speaking.

This can be a tutor, an exchange partner, or even just videos you create yourself. The goal is to get speaking practice in so that you can train your mouth to create the sounds necessary to speak Japanese.

Remember that consistent practice is key.

With a language like Japanese, one that is presumably very different from your native language, regular study is important. Why? For a variety of reasons, but consistent study gives you a better chance of:

There is no one resource that will offer you everything you need to learn a language. Instead, aim to use a mix of resources, ensuring that you cover each of the core four skills that are most essential in terms of reaching your language goals. For example, if you aim to reach a conversational level, you’ll want to spend as much time speaking and listening as possible. If your goal is to read a comic book you enjoy, then the bulk of your time would be better spent with a course book and other reading material.

Master Japanese // This is an excellent book published by John Fotheringham. I used his Mandarin book several years back as well. Both are incredible resources for when you’re starting out.

FluentU // FluentU is a fun and interactive platform that offers subtitles for a variety of video content. It’s available both as a mobile app and on your browser.

Japanese from Zero // This is one of the most popular Japanese textbooks for independent learners. It’s known for it’s simple and straightforward explanations.

Japanese for Beginners // I love the Tuttle course books, particularly because they have diverse options for learners of Asian languages.

Memrise // Memrise is my favorite app for learning vocabulary – whether it’s pre-created decks or your own personal decks.

Drops // A language learning game with extensive vocabulary lists and a beautiful interface. A great way to fill your downtime (sessions in Drops are five minutes).

JapanesePod101 // A popular podcast with a ton of video and audio content for Japanese learners.

iTalki // An online lesson platform with affordable teachers. The average professional Japanese tutor (at the time of writing) is around $15 USD per hour.

LingQ // My favorite language learning app. Why? Because it gives me the chance to do the only other thing I love as much as languages – reading in my target languages.

Glossika // An audio-based learning platform that teaches through repetition.

Assimil // My favorite course book. It’s based on translation, but there are also tons of exercises, useful vocabulary, culture tidbits, and audio.

For more recommendations, check out my Japanese resources page.

I hope that you’ve enjoyed these tips for learning Japanese. I’m really excited to take on this language and share my progress with you.

If you have any resources or tips for Japanese, I’d love to hear them in the comments below.

Previous post:
Doors & Doorways in Bali, Indonesia
Next Post:
How to Use Cartoons to Learn a Language with Your Kids