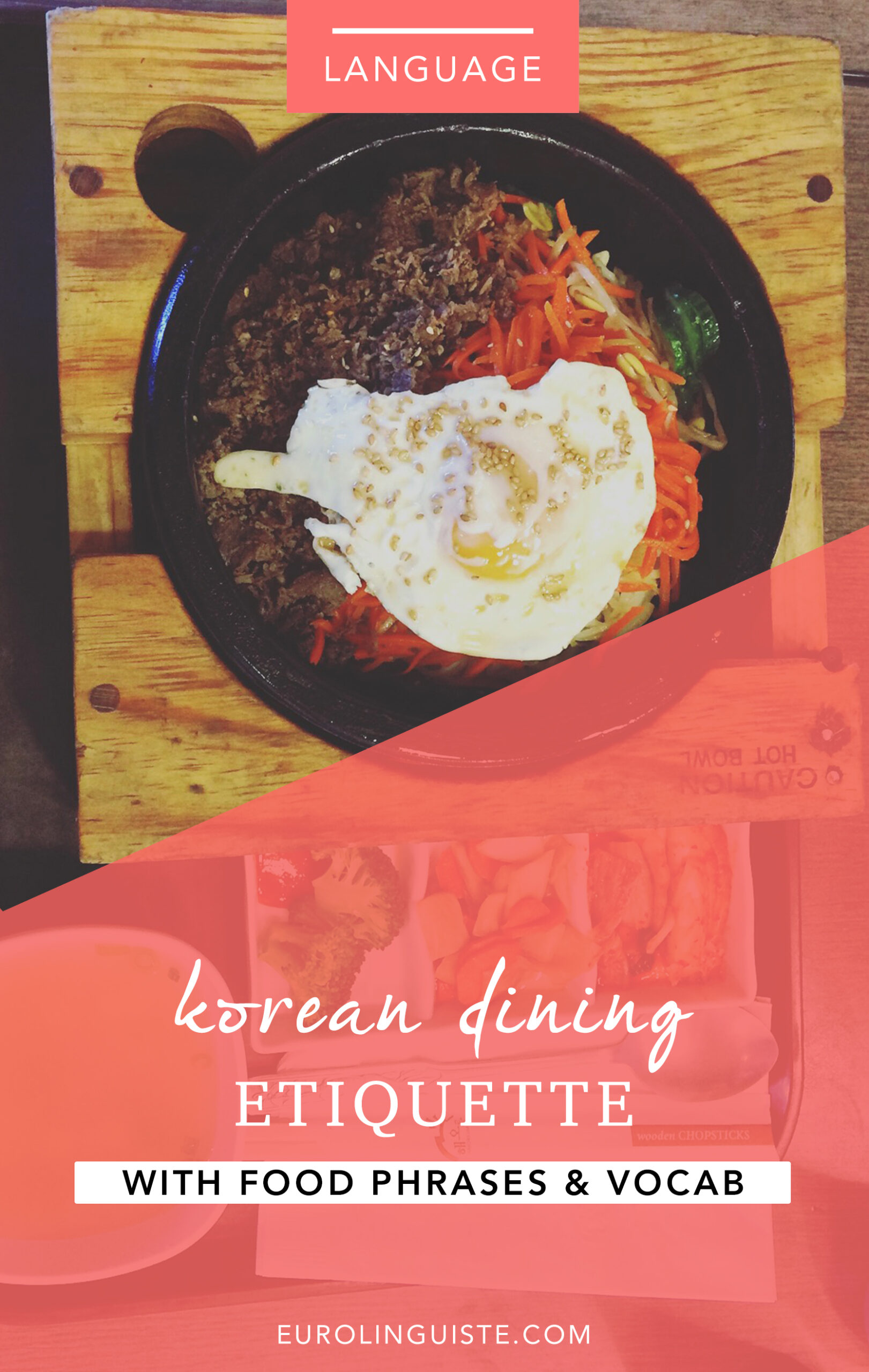 Food is a big part of any travel experience for me. Aside from visiting sites both popular amongst tourists and off the beaten path, I consider a successful trip one where I’ve had the opportunity to try out the local cuisine and some of the best restaurants in the area.

Of course, because food is such an important part of my experiences abroad, dining etiquette is something I always take into consideration.

When it comes to learning a language, there is so much more that needs to go on beyond learning words and vocabulary. Language and culture are intertwined and in order to successfully learn or experience one, there’s no getting around learning or experiencing the other. From the outside, this can seem pretty overwhelming, but in my opinion, learning about the culture of a place is one of the most exciting things I get to do whenever I start learning a new language.

In Korea, foods are often served in large communal dishes as opposed to the individual dishes common in the West. Quite a bit of sharing is involved, which means that eating Korean food comes with its own rules regarding politeness when compared with other cuisines due to the nature with which it is served.

Before You Begin Eating

This phrase is considered extremely polite to say before sharing a meal with someone:

Don’t refill your own glass. Instead, pay attention to the glasses of your neighbors. If their glass is more than half empty, refill their glasses for them. Your efforts will be reciprocated.

Don’t hold your glass with one hand when someone offers to refill it for you. Instead, take it in both hands to accept the refill. When pour for someone else, place your other (typically your left) hand under either the elbow or against your pouring hand lightly.

Don’t let your glass get empty if you no longer want to drink. Instead, leave it at least half full or you may find that it continuously gets refilled.

Don’t face the most senior person at the table when drinking. Instead, turn away slightly.

Don’t refuse the first drink with those at your table. Instead, fill your glass with water or soda if you don’t want alcohol to partake in that first drink.

Don’t place the undesired bits of food in your rice bowl. Instead, discreetly place them out of sight in a napkin.

Don’t raise your rice bowl to your lips. Instead, leave the bowl on the table and stoop down to it if needed (but, at the same time, not too close to the table). This is actually different than what is considered appropriate in either China or Japan. You can use your spoon to eat your rice which makes the distance easier to accomplish.

Don’t serve yourself more than you can eat. It’s considered wasteful. Instead, serve yourself only what you’ll finish. It is alright, however, if you leave a few grains of rice in your bowl.

Don’t talk with your mouth full. Instead, swallow your food and then speak.

Don’t ever eat directly from the shared dishes. Instead, place the food on your plate first and then pick it up once more to eat it.

Don’t eat too fast or too slow. Instead, try to eat at the same pace as the others at the table.

Don’t hold your spoon and chopsticks at the same time. Instead, use one, return it to the edge of your plate and then use the other. Pro tip: You can use your spoon to eat your rice (makes things so much easier!).

Don’t lay your chopsticks parallel to one another across the top of your rice bowl. Instead, rest the end that goes in your mouth against your plate as mentioned above.

Don’t use your fingers to eat food, no matter how difficult or small the item may be. Instead, persevere and make the effort to use your chopsticks (or spoon).

Don’t poke around in dishes with your chopsticks. Instead, select the pieces nearest to you. It’s considered rude to “fish” for the best pieces for yourself.

Don’t try to force a conversation with the people you may share a table with at a restaurant. Some restaurants in Korea do not offer their guests private tables. Instead, allow those you’re sharing a table with to eat in peace.

Don’t feel obligated to tip in Korea. Instead, you can opt either not to tip or, if at a large chain or non-Korean restaurant, it’s okay to leave your waiter or waitress 5%.

Don’t ever blow your nose at the table. Instead, excuse yourself to go to the restroom if you feel the need to do so. This may seem obvious, but some spicy Korean dishes may make this one tough to accomplish.

Don’t get up until the most senior guest finishes eating. Instead, wait patiently for them to finish their meal and rise from the table before getting up yourself.

Ordering at a Restaurant

May I see the menu?

One way to ask how someone is in Korea is to ask them if they’ve eaten yet. You can say:

If you’re amongst friends and can be a bit more informal, you can say:

What are some of the most important things you like to pick up about the place you’re going before you go on a trip?

What are some of the cultural tidbits about the language that you’re studying that you’ve most enjoyed learning?

Let me know in the comments below!