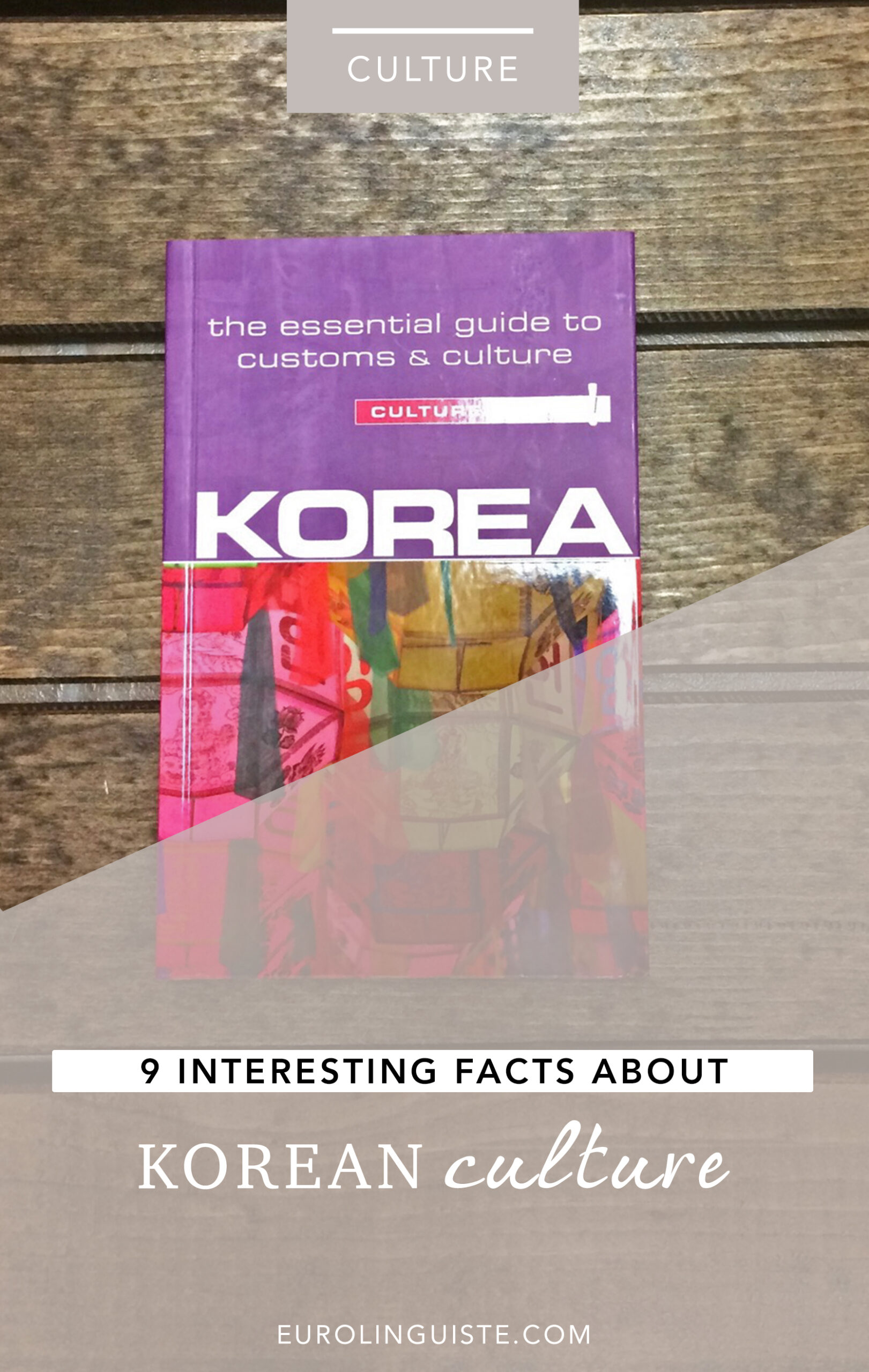 I truly honestly believe that learning a bit about the culture(s) of the language(s) that you’re studying can go a long way in helping you to feel more attached to the language. Earlier, I discussed the importance of sociolinguistics – how culture ties into language – and to continue that conversation, I’d like to share culture guides for various countries around the world to help you make your travels and language learning that much more enjoyable.

I’ve partnered with Kuperard to create this series and I’m really excited to share a few cultural tidbits about different countries, starting with a country I’ve recently visited and a language that I’ve fairly recently learnt. Here are 9 interesting facts about Korean culture.

Transliteration for the Korean alphabet has faced significant debate since the seventeenth century. Initially, French Roman Catholic missionaries worked to offer Westerners a system for offering a suitable way to transliterate the Korean language, and this system can still be seen in Korean resources for those who speak the Romance languages.

In the 1930s, two Americans devised yet another system of romanization which came to be known as the McCune-Reischauer System. There is also the Yale system which was developed in the 1950s and it is the system favored by linguists.

The above systems, however, are not always accepted by Koreans and in South Korea, various attempts have been made to introduce a system that originated in Korea. In 2000, a new system was introduced (called the Revised Romanization), but many English speakers do not like the new system because it can lead to as many mispronunciations as the McCune-Reischauer System.

Some people in Korea, especially elders in the countryside do not like having their photos taken. So it’s best to ask permission or avoid taking the photo to avoid giving offense. You also should avoid photographing anything that looks like it could be used for military purposes.

If invited to someone’s home, it is polite to bring a gift. Flowers are acceptable as is western liquor or books about your country. Gifts should be wrapped, preferably in gold colored paper. Black or white are not are not considered acceptable colors for gift wrap. It is also important to note that it is seen as rude to offer something with the left hand, especially if the person is a senior in age or rank yo you. Instead it’s best to offer objects with both hands. But if this proves impossible, use the right hand.

There are quite a few rules regarding table etiquette in Korea which is why I wrote this post. But a few quick pointers are:
– Don’t blow your nose at the table
– Don’t stick your chopsticks upright in your rice
– Don’t point with your chopsticks
– Don’t start eating until the most senior person at the table has started
– Don’t hold your spoon and chopsticks at the same time

Laughter is not always tied to humor. Sometimes it is used to hide embarrassment or to soften bad news and it can be used to save face. The concept of “face” in Korea is important to understand and you can either “save” or “lose” face.

In general, pronouns are not used in Korean. Rather than using he/she/they, people are referred to by their relationship to the speaker (mom, uncle, brother), their profession (teacher, CEO, manager), or by their name (usually surname and not first name). You can also use miss, mrs, or mr.

Bowing is something you’ll do quite a bit in Korea (it’s like shaking hands amongst Westerners). A good rule of thumb to follow whenever you aren’t sure whether or not you should bow is to either bow if the other person bows or if you are addressing a senior or someone older than you. Typically, men keep their hands a their sides while they bow whereas woman clasp their hands in front of their bodies while they bow.

In cities, pushing and shoving can be normal amongst strangers (those who you know will not likely exhibit the same behaviour towards you). This is done both to visitors and other Koreans, so don’t feel as though you’ve been singled out if your bumped out of the way while you’re traveling. In fact, it means quite the opposite!

The use of the word ‘friend’ in Korean is actually quite complex! The term can be used much like ‘brother’ or ‘sister’ are used in Korea. Thanks Melinda for this tip!

Children are celebrated 100 days after their birth because a child who survived that long was likely to live. This is called Baek-il (백일) and it is celebrated by placing red bean rice cakes at the four compass points of the house and in the sharing of rice cakes with family, friends, and neighbors (it is believed that the more people there are that eat the rice cakes, the longer the life the child will have).

This guide was assembled with the support of Culture Smart! China. The Culture Smart books by Kuperard publishers are a part of a series of nearly 100 titles. You can purchase the books on Amazon and learn more about the company here.