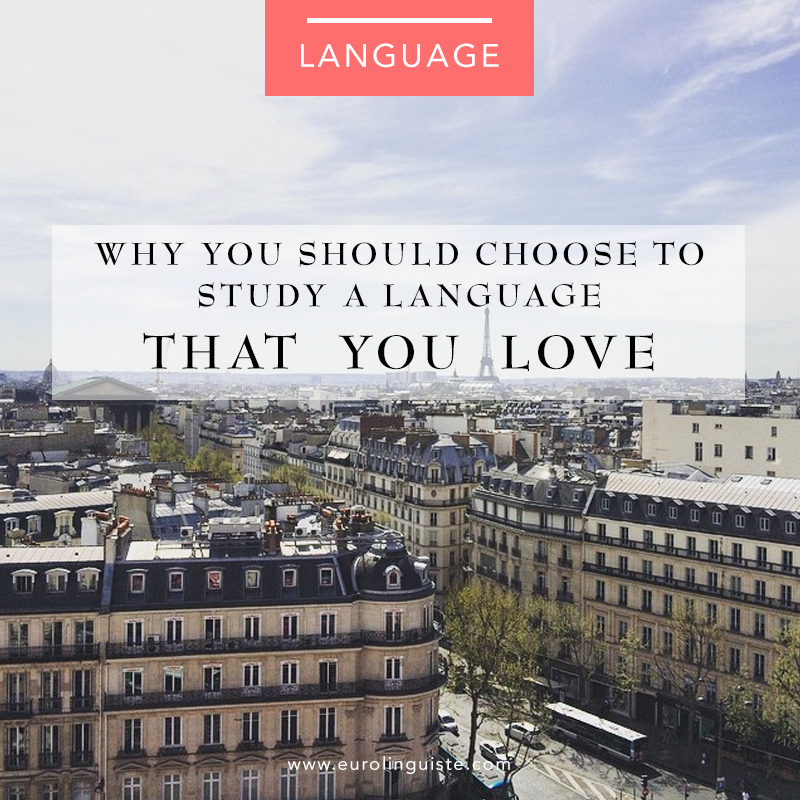 How Studying Music Made Me a Better Language Learner

We all learn languages for a variety of reasons. Sometimes we choose to learn a language because we want to be able to communicate with family or friends. Or it might be because we’re getting ready to go on a trip. It could also, perhaps, be for work. Or maybe it’s just because it’s just been one of those things we’ve always wanted to do.

Each of the above results in our learning the language differently. Someone getting ready for a trip might just learn enough to get by while they’re visiting the country. Someone who needs to know a language for work might focus entirely on business and industry related vocabulary. Whereas someone who learns a language to speak with friends and family may focus on conversation based vocabulary which is a little more personal.

Regardless of how we learn a language or why we choose it, there is one key to successfully learning a language.

It’s to fall in love with it.

For some of us, loving the language we’ve chosen to learn happens before we even learn our first word. Maybe we heard it somewhere before or we just love some part of the culture tied to it – food, arts, architecture, anything really – and it took hold of us. Sometimes the love for the language blossoms as the learning process begins. As we become acquainted with its “idiosyncrasies” and its culture, we grew to love it.

So how do you choose a language that you’re going to love?

Trial and error. If you already have an inkling which language you’d like to learn, that’s the one to pursue. You want to have a tie or interest in the language and its culture so that you’re motivated to sit down and study.

If you aren’t sure, and you’re open to learning any language as long as it’s one other than the one you already speak, your first choice might not be the right choice. And that’s okay. If you really want to learn another language and your first pick wasn’t the right pick, don’t be afraid to start over with another language. The next language might be the one that clicks for you.

The important thing to think about is what your goals with the language are and whether or not trudging your way through grammar will bother you. If you hate grammar, you may start to avoid studying your language which will, in turn, make you feel as though you’ve failed at learning it. This might then discourage you from learning other languages because you’ve decided that you don’t have a knack for it.

It could just be the case that you’ve picked a language that wasn’t well matched with your learning strengths. Or that you didn’t feel strongly enough about.

It doesn’t matter how hard or easy a language may be. If it, for whatever reason, isn’t a language that you want to learn, or one with which you lose enjoyment in learning somewhere down the line, you’re going to struggle with it more than you should.

This is why you need to pick a language that you love. You might not always enjoy the language learning process, but if you love the language and the benefit of knowing it, you’re more likely to stick with it.

Why You Should Pick a Language That You Love

I have learnt languages for a variety of reasons. I learnt them because I loved the way they sounded, because I felt a personal attachment to them, because I thought it would be practical, and because I didn’t like the other options at school. Can you guess which languages I still speak today?

And yes, there is one exception, but I started to love it after I began learning it, so it doesn’t count. Even though it wasn’t at the beginning, there was a point where I grew to love it. If that hadn’t happened, I can say with absolute certainty that I wouldn’t still be studying it today.

Choose to pursue the things that you enjoy.

This is similar to a situation I frequently face with my music students. They often pick an instrument just to get started, but once they’ve done music for a year or two, many switch instruments. Why? For two reasons. One reason is that they’ve noticed another instrument, have fallen in love with it, and decide to pursue it because they cannot imagine not playing it. The other is because a teacher or a parent have told them that the instrument is rarer, and playing it well will likely lead to them receiving a scholarship to university later on down the line.

Which student do you think enjoys continuing music most? And which do you think is more likely to continue doing music?

It’s usually the former. For them, music isn’t about receiving scholarships or getting into a better university, it’s about their joy for music and the instrument that they play. They also usually end up spending more time on their instrument (of their own will and not because their parents are driving them) and therefore, end up improving the most.

The same goes for languages. It’s okay if your first language isn’t the right one for you. It certainly wasn’t for me. But rather than growing frustrated with my inability to learn that language, I used that occasion to pursue the language that I had actually wanted to learn instead. It was then that I had a more successful language learning experience.

Why? It wasn’t because the language was easier for me. It was because I really wanted to learn the language so I pushed myself through learning plateaus and grammar headaches to get to the point where I could use the language without sounding like someone stringing a bunch of random words together, hoping that they made sense.

If There Ever Was a Magic Key to Learning Languages, This Might Be It

When it comes to language learning, there’s not shortcut or secret to success. You have to spend the time required with your rear in your chair studying, memorizing vocabulary, and reading grammar rules until something clicks. There’s really just no way around it.

Yes, there are things that make learning a language more enjoyable like using it successfully while ordering at a restaurant, watching a film without subtitles for the first time, listening to music and singing along, or carrying on a conversation. But none of those things are going to happen for you unless you put in the work first. That’s just the way it is.

So the only secret is to love the language that you’re learning so that the time you spend studying doesn’t feel so painful. Yes, it will still be hard sometimes, but having that underlying motivation makes it easier to continue on even when the going get’s tough.

There are, as always, exceptions. One could argue that there are successful language learners who have learnt a language without ever loving it. Cheers to them! It isn’t impossible to learn a language if you don’t love it, but loving it does make it a whole lot easier to keep at it long enough to make it to an advanced level in the language.

It doesn’t matter if you fall in love at the start or a few months after you start studying. All that matters is that you love the language and the opportunities that you have to use it.

What are the languages that you love learning and speaking? Have you ever learnt a language for any reason other than having the desire to learn it? I’d love to chat with you about your experiences in the comments below!