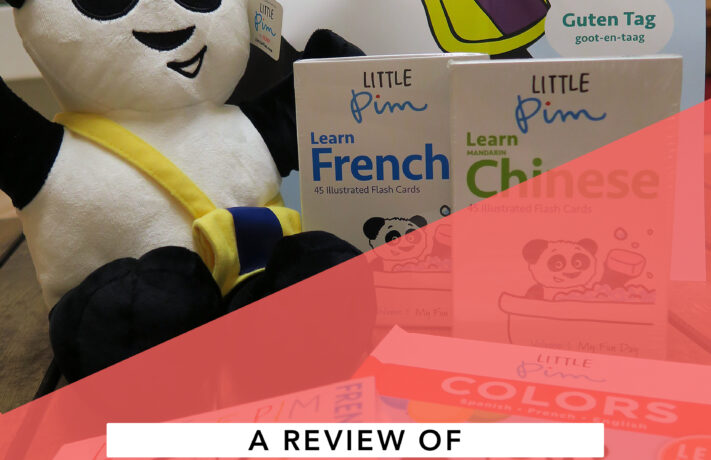 This past month, we experienced a pretty big change, welcoming a new addition to our little family. We’ll call him Little Linguist for now. 😉

Before having kids, we spoke about our plans regarding language, particularly because we are a bilingual couple living in a monolingual country. M’s family speaks one language and mine speaks another, and we agreed that we wanted our kids to speak both languages.

But then I started studying Mandarin and fell head over heels for the language and while my public goal was to sit and pass the HSK 4 exam, my secret goal was to learn the language well enough to use it with our children (although it took some convincing for M to be on board with this one). And ironically, I found out I was pregnant with Little Linguist the night before my exam.

While I don’t want Eurolinguiste to become a bilingual parenting blog, I still thought I’d share our experiences raising a child with multiple languages every so often. Particularly because one of the languages we’re raising him in is my non-native language and I will be the parent primarily responsible for passing it on to him.

So about once a month, I plan on sharing our victories and our failures as we embark on this new journey, the tools that we’re using, as well as Little Linguist’s progress.

It will be some time before he starts speaking, of course, but I want to be sure to expose him to as much English, French and Chinese as possible early on. Children begin picking up the sounds that make up different languages before they’re even born, so it’s never to early to start.

And while I’ve mentioned him before (albeit vaguely), Mini M, my stepson, will also be joining us. He started living with us full time at the beginning of the month and is currently learning to speak English. As I review some of the different products, especially those in English-French or French-English, I’ll be sure to include some of his input.

When I was doing research and deciding on some of the different resources that I wanted to work with when helping my kids better speak and understand French, English and Mandarin, I came across Little Pim.

Little Pim was developed by Julia Pimsleur (the daughter of Paul Pimsleur), and you all know how much I love the Pimsleur method. It has been quite an effective learning tool for me, so I was really curious about the program developed for kids.

Geared towards kids aged 6 months to 6 years old, Little Pim utilizes a variety of media and entertainment tools to engage kids and help them learn a language. The program teaches kids about 360 words to use as part of their everyday activities.

I had the opportunity to work through the Little Pim resources while waiting for Little Linguist to arrive and I thought I would share my thoughts on the product both as a new mom and as an avid language learner before later sharing an update about how Little Linguist seems to feel about it.

I have both the French and Chinese versions of Little Pim – not everything! – so I thought I’d quickly outline the products that this review is based upon:

Overall, I think that the packaging colors and designs and the cute little stuffed panda will definitely appeal to young children. The use of a variety of media formats (video, flashcards, books, etc.) are also really great because it gives kids a few different ways to interact with the languages that they’re learning. Plus, the colors are bright, the videos feature children completing various activities, and there’s just the right amount of repetition to keep kids engaged.

As I watched the videos, I even learnt quite a few new words and phrases (in Mandarin) related to the day-to-day activities a child might participate in and so from that perspective, as a parent trying to support their child’s language learning efforts, especially when it comes to a language that is not my own, this was incredibly helpful.

For my stepson, the fact that the French flash cards include both the English and French words is really beneficial, especially since this is likely the only resource that might interest him considering his age. I can show him the side with the image and ask him to recall the English word, then show him the backside with both the French and English translations of the word.

The videos don’t have any English. It’s real immersion right from the start and only audio in the target language is used on the videos, using images and clips to show kids what the words mean.

There are free guides available for parents to assist them in helping their children learn a new language. This is especially great for parents who don’t speak the new language. The guides include a general Parents’ Guide to help ensure that the program is used to its fullest potential as well as episode guides which include the phrases and words that are used in the videos.

There are 45 illustrated flashcards in each set. This is fantastic because it gives you such a nice collection of new words for your little one. The illustrations are also quite fun (they show the Pim panda doing each activity).

The audio CD includes a lyric book. A totally awesome resource for parents so that you can learn to sing along with your child and even correct them on the lyrics if needed.

The vocabulary in each of the videos, books, and on the flash cards are incredibly appropriate for a young child. They are related to words that they would use on a daily basis and are presented in a way that the children are sure to retain. Some of the relevant vocabulary I came across while working through the videos included things like brushing one’s teeth, cuddling, taking a bath, bubbles, nap, etc.

The physical products are made of good quality materials. The board book is nice a thick, the panda plush is adorably soft and the flash cards are laminated and made from good cardstock so that they’ll hold up when being used by young children.

The digital videos are each 30-35 minutes long. I read somewhere that the DVDs break the 30+ minute episodes down into 5 minute chapters. These would likely be much better suited to the attention span of a young child, but the digital copies of the episodes that I received were not broken down into shorter segments. I imagine that this would mean Little Linguist will see the beginnings of each video far more than he will see the ends (I doubt he’ll be able to sit through the entire video often), so he’ll miss out on really learning the material towards the end of each video.

I’d really love for some of the video content to be story-based rather than topic-based. I think that kids engage more with stories than they do with other formats.

The same video content is used in both the Chinese and French versions of Little Pim, so even though the language changes, the child is seeing the same video footage. I imagine that they could quickly grow bored, especially if they are learning multiple languages through the program. I also think that kids learn a bit better when they see our mouths form the words, so I also think the video content could be better in this respect.

There are currently only six 30+ minute videos per language. I’d really love to to see a Level 2 so that parents have a “next step” when their child masters (or grows bored) with the Little Pim material that is currently available.

The Chinese flashcards do not include the Chinese characters. Instead, they have the English translation, the pinyin and a transliteration of the word. For kids who are learning to read, I feel that having the characters could be hugely beneficial.

Overall, I really enjoyed working through the Little Pim material as a new mom and I can’t wait until Little Linguist is just a little bit older so that we can enjoy it together. The program gives me a great way to include more Chinese and French in his learning and will be a fun way to interact with him, helping him learn to understand and eventually speak each language.

Little Pim, like any other resource, won’t teach you (or your kids) a language on it’s own. But, it is a fantastic tool that can be incorporated into a greater language learning plan.

The material is definitely geared towards younger children (those under 6), so children that are older are less likely to be interested in the content presented by Little Pim.

Are there any language learning resources for kids that you’ve found useful for either yourself or your little ones?

Previous post:
The Story of Writing Review | Language Reading Challenge
Next Post:
30 Things to Do in Barcelona, Spain on a Self-Guided Walking Tour