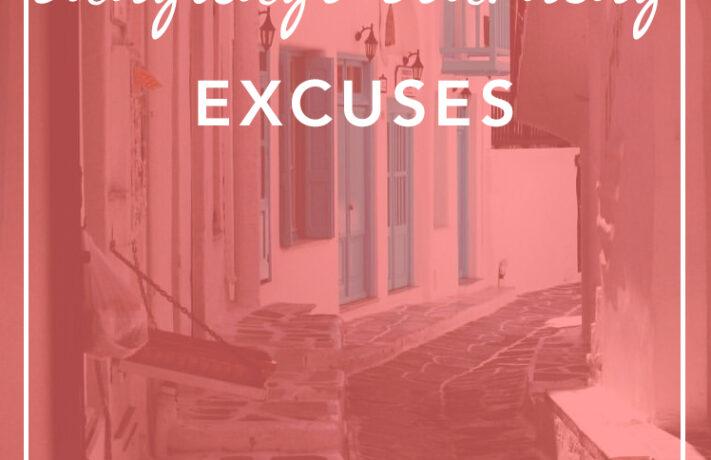 Today I’d like to share a little bit about someone who has recently inspired me and talk about making excuses.

Excuses are easy to make. They make us feel better about not doing things we either should be doing or want to be doing. It’s easier to blame our lack of progress on things that are external to us, to shift the fault elsewhere.

So let me tell you about someone who doesn’t make excuses.

Through the language learning community, I often meet people who inspire me. You all are just so amazing and I am always impressed with your stories. But recently, I’ve gotten to know someone who really stood out to me.

I first met Chenelle Hancock over on my Facebook page. She’d often leave me encouraging comments, and over the past few months, I’ve had the opportunity to get to know her and a little bit about her story.

I could introduce her to you, but I think she does a much better job herself in this video that she put together. So I’ll let her do it.

When Chenelle went through the list of resources that she used to learn Russian, I was so impressed. I often feel that as language learners, we can be quite lazy, choosing resources at random or because they’re popular rather than because they’re a good fit for us. But that’s not what Chenelle has done at all. Instead, she’s very carefully curated a collection of resources that work for and succeeded in studying a language that she feels passionately about.

And not only does she learn the languages she loves, she also does what she can to help others out around the world. I recently saw her post in a community forum, asking for help learning a language so that she could help someone else learn to read braille. I was just blown away by her passion for languages.

I know you’ve heard them too.

I have no time. I don’t know which resources to use. I’m too old. I’m bad at learning languages. I’m not comfortable talking to people. I can’t afford to travel to the country that speaks the language. Everyone speaks English, so there’s no need. Blah. Blah. Blah. If you don’t see yours here, Benny Lewis wrote an excellent post on 32 excuses learners make when it comes to languages http://www.fluentin3months.com/reasons/ and why they aren’t valid.

Regardless of what your excuse is, it’s time to recognize it for exactly what it is – an excuse.

If you look at what learning a language means, it can seem like quite the daunting task. Heck, when I think about how much time and energy went into learning the languages that I speak, it makes me question myself every single time I even think about picking up another one.

I wonder:
– Am I wasting my time?
– Would this energy be better spent elsewhere?
– Do I really love this language?

When I decide that each of the above answers are no-no-yes, then I take a deep breath and make a plan. I worry less about what my end goal is and more about what I’m going to do in the next week or the next month to start moving towards that bigger picture.

It’s so much easier to succeed at language learning when you focus on the next step rather than “the end”, because really when it comes down to it, there isn’t an “end.” Once you start learning a language, there is no finishing point for your learning. There’s not point where you can say, “alright, that’s it I’ve arrived and there is nothing more of the Spanish language that I can learn.”

We can’t even say that for our native languages!

This is a huge part of why I believe that goals alone are not enough. We need detailed plans to keep ourselves on track and moving in the right direction.

This is also why I participate in #clearthelist every month. By putting my goals for the month out there, I lessen my ability to make excuses for not doing what I said I was going to do. Because when I write that I didn’t do something, I also find myself trying to explain why I didn’t do it.

And guess what that is?

So by participating in #clearthelist, I increase the odds that I’ll do most of what’s on my language learning to do list because I don’t want to make excuses for not doing the things I committed to.

When it really comes down to it, we all have a tendency to makes excuses. I’m just as guilty of it as anyone.

So, I’d like you to make a commitment along with me. This month, pick an excuse that you’ve been making and commit to a month without making it. You can let me know what it is in the comments so I can cheer you on, or you can just let me know you’re making the commitment without any specifics if you don’t want to share the details. ?

The excuse that I make most often is that I have no time.

I am pretty busy, but that’s no excuse. Especially since there’s something that I firmly believe in.

If it’s important to you, you’ll find the time to do it.

So whenever I make the excuse that I didn’t have time, I’m basically saying that language wasn’t important to me, which is definitely not the case.

And I’m ready for that to change. I’m ready to show, through my actions, that language learning is as important to me as I say it is.

So that’s mine. What’s yours? I look forward to hearing from you in the comments below!

Previous post:
9 Interesting Facts About Serbian Culture
Next Post:
How I’ve Failed at Language Learning and Why I’m Okay With It