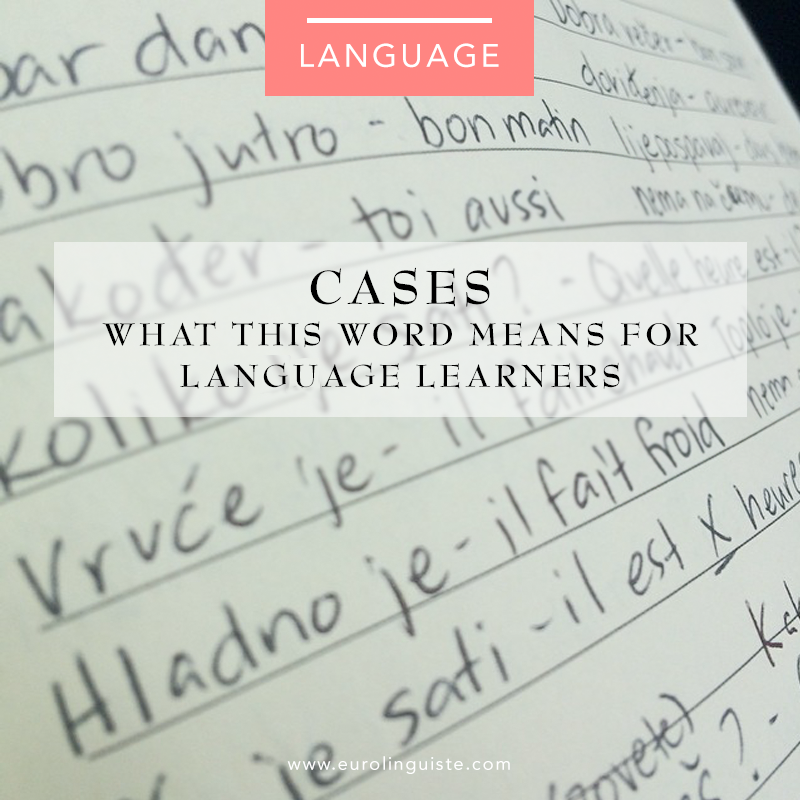 Cases. If you’re about to learn a language and you’ve been doing a bit of research, you may have stumbled across this term in your reading.

Perhaps it was someone celebrating that their language didn’t have any cases or another complaining that the language they’re studying has too many. Either way, it’s definitely something that gets brought up.

If you’re not past the newbie stage in your language, however, you might not know what these things called cases are.

So what exactly are cases when it comes to language learning?

When I decided to study my first Slavic language, I was completely ignorant of cases and what they would mean for both my grammar and vocabulary studies. If I had known about them, I might have thought about my decision more carefully. But all I cared about was the fact that my grandfather spoke the language, that it sounded pretty, and that it was different than the other languages I had learned.

It would be a grand adventure!

And then I began hearing the word “cases” come up in my lessons and as I started to realize what I had signed up for, I was already knee-deep in learning Croatian, madly in love with the language and it was too late for me to turn back.

So that’s why I want to share what I’ve learnt since then with you. I want to help you make an informed decision when you’re selecting your next language.

Why are cases a big deal?

Different language learners struggle with different aspects of language learning. For some, memorizing vocabulary may be more difficult. For others, absorbing grammar rules may seem impossible.

Languages are also unique in that there are certain aspects of each that are more difficult for learners depending on their background and native language. The grammar of languages with a lot of different cases will be much harder for a learner whose language does not have many, while a language with a tonal system, like Chinese, may be difficult for someone who struggles to remember vocabulary since many of the characters sound similar if you don’t have an ear for tones.

If grammar isn’t your thing, learning a language with several cases might not be for you. But if your love for the language can help you work through it, then by all means go ahead!

As long as cases aren’t something that will deter you from continuing on with the language, they’re not a big deal. But if you really don’t want to spend the time memorizing extra vocabulary and learning the rules surrounding cases, then a language with several of them might not be the right fit for you.

So what are cases?

The truth is, cases are pretty complicated, but it’s all about approaching them within a context. Trying to memorize the rules and the words that are tied to them in isolation can make that part of learning a language that much harder, so I don’t recommend it.

The word “case” is derived from the Latin word casus which means “to fall.” It is used to describe words that have fallen away from their nominative, or root form.

Cases are the grammatical function of a noun or pronoun within a phrase, clause, or sentence. To use English as an example, it’s essentially the difference between I and me, he and him, she and her. “I fell in love with him” or “He fell in love with me.” It helps indicate who or what is doing the action and who or what it’s being done to.

In some languages (*cough* Croatian), the adjectives are also modified to indicate the case being used. In others, only the nouns themselves reflect which case is being used.

What does this mean?

It means that you have to study several versions of every noun you learn in a language with cases. In a language like Croatian ,where you’re already dealing with gender and plural forms of words, cases add a whole new dynamic to the memorization of vocabulary and grasping even basic grammar.

Cases can be pretty intimidating for someone who doesn’t like grammar. Especially since they’re quite important relatively early on. In comparison to a language like, French, where the grammar isn’t too hard at the beginning (for English speakers), a language like Russian is going to challenge you grammatically right from the get-go. You can’t even say something as simple as “I live in the US” or “I am from Ireland” without encountering them. My Croatian teacher even advised me not to try to really delve into the language or learn too much vocabulary until I had a basic understanding of cases!

But please don’t let cases deter you from learning a language if it’s one you really want to pursue. Yes, they’re hard, but they’re not impossible. And once you learn the rules, they become second nature. It may be hard working getting to that point, but once you do, you’ll feel even more rewarded for sticking through it.

What are some of the different cases?

I’ve included this section just to provide a description of a few of the different cases. There are, of course, more than what’s listed here, and the descriptions I’ve included are really simplified versions of the rules that surround cases. The ways in which cases are used vary from language to language, and they can be significantly more complex than what’s below.

So why am I including this section? To give you a few, basic examples of cases and how they work.

So let’s take a look at 8 different cases:

Nominative // This case indicates the subject. I love pears.

Accusative // This case indicates the direct object of a verb. My mom loves me.

Dative // This case indicates the indirect object of a verb. My mom bought me some pears.

Ablative // This case indicates movement from something. It can also indicate a cause. She bought them from the store.

Genitive // This case illustrates possession. It also corresponds with the preposition of. My pears were delicious. I enjoyed every bite of the pears.

Vocative // This case indicates who or what is being addressed. Hey, Mom! Thanks for the pears.

Locative // This case indicates, you guessed it, location. I can’t hear you, Shannon. I’m in the kitchen.

Instrumental // This case indicates an object being used as part of an action. I’ll just send her a text with my phone to say thanks.

Wikipedia has even more examples of cases in different languages if you fancy taking a look.

What languages have the most cases?

Hungarian has a whopping 18 cases and Finnish has 15. Basque, Estonian, Georgian, and Bengali each have more than 10 cases. West Greenlandic has between 8 and 9 depending on who you ask (you can see where this starts to get complicated) while Tamil has 7 or 8. Polish, Czech, Serbian, and Croatian have 7. Latin and Russian have between 5 and 6. Romanian has 5. German, Icelandic, and Modern Greek have 4.

You should also take into consideration something that I mentioned above. In some languages, like Icelandic and Croatian, cases not only change the noun but they can also modify the articles, adjectives, and personal names.

Here’s an awesome map with a breakdown of languages and the number of cases they have.

Which languages don’t have cases?

Spanish, Italian, Catalan, Dutch, Vietnamese, Mandarin, and Indonesian are among some of the languages that don’t have cases.

Want to avoid cases in a language that has them?

To a certain degree of course, there are two ways to do this. They may not eliminate the need to use cases entirely, but they just might cut down the number you need to express your thoughts.

One way is by throwing in a preposition. In another language, changing the sentence from “My mom gave me some pears” to or from “my mom gave some pears to me” can make your life simpler.

Another is by changing the word order. Again. “The pears were given to me by my mom” as opposed to “my mom gave me some pears” can make a huge difference your ability to form sentences.

It’s all about flexing your language muscles and using what you know to construct the things you’d like to say. Sometimes that means going at it in a round about way. And that’s okay as long as you’re saying what you mean and meaning what you say.

[Tweet “It’s all about flexing your language muscles & using what you know to start speaking.”]

An Interesting Little Tidbit About How Languages Evolve

There’s actually a special word to describe the loss of cases or the merging of two separate cases into one. It’s syncretism. This word describes the loss or reduction of cases in the different languages, which includes Modern Greek, English and German.

Older forms of the three languages originally had more cases but they either melded into fewer cases or fell out of use. In fact, cases seem to be more prominent in older languages – Old English, Sanskrit, Ancient Greek, Latin – but they are not as common in languages used today. Instead, we’ve replaced their place in our grammars with our little friend, the preposition.

Are you learning a language with a lot of cases? What has your experience been? I’d love to hear about it in the comments!