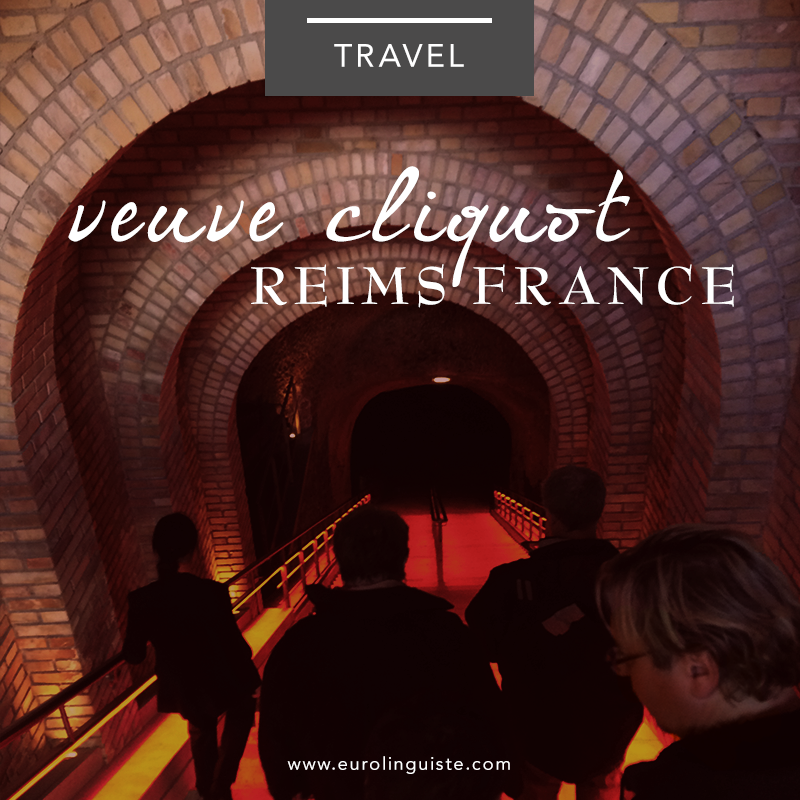 How I Memorized 600 Chinese Words in 2 Weeks

When one thinks of France, one of the images that often comes to mind – along with Paris, the Eiffel Tower, and cheese, of course – is that of Champagne.

The historic Champagne region is located in the northeast of France and is best known for – you guessed it – the bubbly, white wine that shares its name with the region. According to EU laws and the laws of most countries, the term “Champagne” is reserved solely for wines that are from this region.

There are a total of five districts that make up this wine producing region, but Reims and Éperney make up the commercial centres of Champagne. It was the former to which we decided to make a day trip, or local adventure, since it was only about an hour drive outside of Paris.

A Brief History of Veuve Cliquot

Founded in 1772 by Philippe Cliquot-Muiron, Cliquot champagnes came into prominence in 1805 when the widow of Cliquot’s founder’s son, François Cliquot, was left with control of the company. Barbe-Nicole Ponsardin became the first woman to take over a champagne house and she led it to great success.

Tours of Veuve Cliquot are by reservation only and are 50 euros per person (at the time we went). This includes a historical tour of the facility, a trip down into les caves, and a single tasting at the close of the tour.

The Tour of Veuve Cliquot

The tour of Veuve Clicquot begins with an historic introduction to the company while viewing some of the various documents, bottles, and tools used by the company over its 300+ years of operation. The process of champagne-making is explained in detail and after learning about the 393-hectares of land that make up the vineyards for Veuve Cliquot, you’re taken across the street and to the secret door that leads down into the old chalk quarries that have been used as a wine cellar since 1909.

The look into the cellars begins with a long descent down a flight of stairs into a cool, lowly lit chamber filled with racks of champagne bottles covered with dust and finger-drawn messages from previous visitors. You’re shown a map of the layout of the quarries and are warned not to stray from the group. There are countless chambers and one can easily get lost!

You’re then taken through a variety of rooms where you can see the bottling and preparation process that goes into champagne making at various stages.

Sabering Champagnes // The tradition of removing the champagne corks with a sword was started when Veuve Cliquot wines were given to soldiers during the Napoleonic era.

Do you have something that you love to photograph? I’d love to hear about it in the comments below!