Get by in Croatian, Language Resources 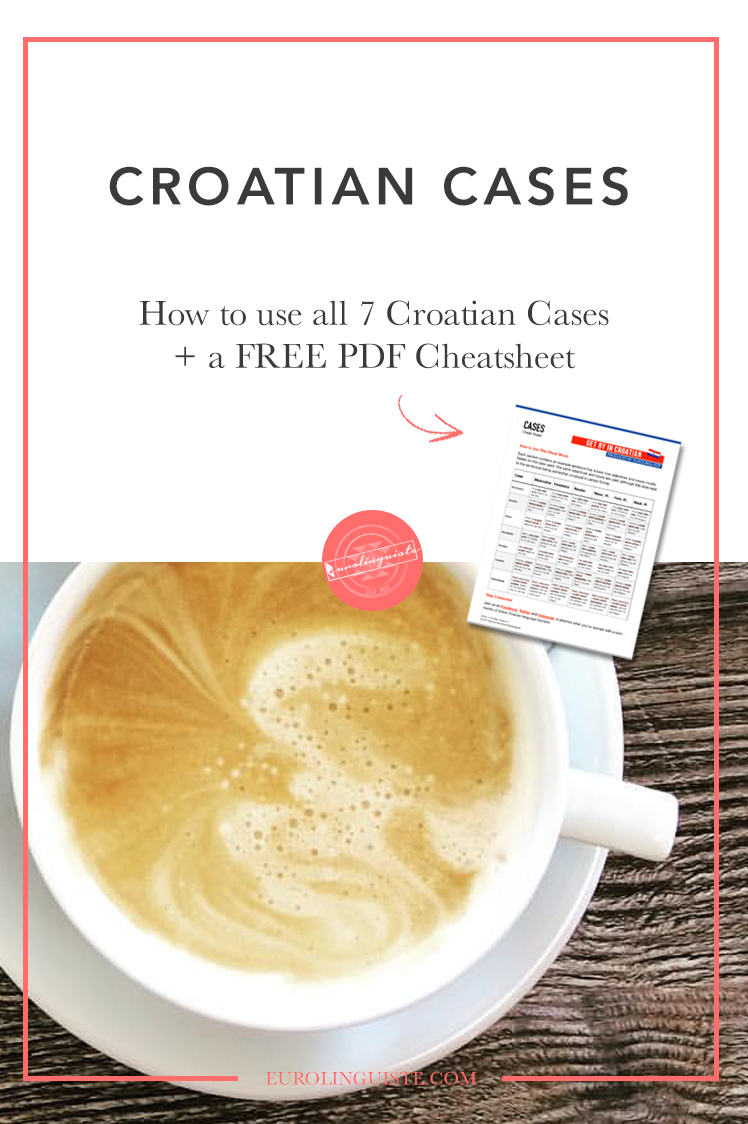 As a Croatian language learner, one of the things that I’ve struggled with is the case system.

In an earlier post, I wrote about cases and how they are used, but it wasn’t specific to Croatian. So instead, today I’d like to share the cases that are used in Croatian specifically, offer examples and a free PDF cheat sheet to help clarify things for you.

Croatian has seven cases: nominative, genitive, accusative, dative, locative, vocative and instrumental. Where word order in English tells you who is doing what and where, cases take over in Croatian. This means that word order is much more flexible.

Nominative // The nominative case tells you the who or what and is the dictionary form of the nouns and adjectives. It is used for the subject of the sentence (who or what is doing the action).

An example of a sentence that would you nominative is: That is my cat.

Neither cat nor my would be modified.

An example of the genitive case is: It is my father’s [gen] cat.

Accusative // The accusative case is used for the object of the sentence (in contrast to the nominative being used for the subject). This tells you the who or what the action is being done to.

An example of a sentence in which you would use the accusative case is: He tripped over the cat [acc].

Dative // The dative case, in short, is used when giving or selling to someone. It is the indirect object.

An example of a sentence using the dative case is: I gave the cat to my father [dat].

Vocative // The vocative case is used when you are addressing someone or something.

An example of a sentence using vocative is: Father [voc], watch out!

An example of locative is: The cat is in the box [loc].

Instrumental // The final case is instrumental which tells you “with” who or what.

An example is: The cat is with my father [instr].

The locative and dative cases use the same endings, so you really only need to learn six different forms.

I had trouble remembering the cases off the top of my head – especially since both adjectives and nouns have declensions. And because Croatian has masculine, feminine, and neuter forms (plus plural forms for each of these, the math works out to:

7 cases X 6 forms = 42 endings you need to learn (and that’s not counting exceptions or when feminine words end with a consonant). Plus there are different endings for possessive pronouns and adjectives (which are also modified by gender).

I chose not to include the exceptions because I just wanted something I could look at quickly and use in the context of a conversation without getting bogged down by grammar. This was the result.

On this sheet, you can see how each case modifies the possessive pronoun, the adjective AND the noun for masculine, feminine, neuter and plurals.

If you’d like to grab a copy, just click here and I’d be happy to send it to you along with my PDF with 100+ Useful, Conversational Words & Phrases in Croatian.

And if you’d like more Croatian language lessons, you can check out my free podcast Get By in Croatian.

If you have any questions about Croatian or cases, I’d love to hear from you in the comments below!