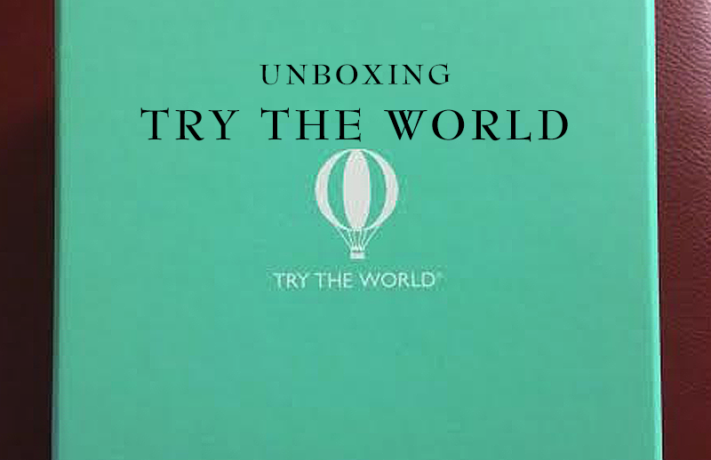 I was recently introduced to Try the World box (by Local Adventurer) and I immediately fell in love with the way they combine food, culture, and travel to create an irresistible subscription box. As you all know, I’m a huge fan of discovering new foods, cultures and travel and so if there was ever a subscription box that was a perfect fit for me, this is it.

A Little Bit More About Try the World

Try the World sends subscribers a box every two months filled with around six goodies selected by experts, an information guide with recipes and cultural information on the region featured, and more.

I purchased their sample box to do my first unboxing video and I enjoyed every single thing in it. Especially the coconut chips.

As I eagerly awaited the next box, M and I chowed down on a delicious ricotta pesto, English mustard, and coconut chips – which I’m now addicted to. And obviously we didn’t eat those things together. That’d be weird. But, I mean, hey, if you like mustard on your coconut chips. Power to you.

Earlier this month, my first themed box came in the mail last week and it was… drumroll please… JAPAN!

I love Japanese food and I was a little bit too excited when I saw what the theme was. Especially considering the fact that there was a recipe and some of the ingredients needed to make okonomiyaki. You guys… OKONOMIYAKI! Japanese pancakes! Yum. Seriously.

So without giving too much away, I’d like to share my unboxing video for this month’s Try the World box and then after I’d like to talk about the origins and add a little more information about each of the items in the box.

Lychee Gummy Candies from Kasugai // In the video I said I put them down so that I would stop eating them, but if I’m totally honest with you, the minute I was down filming, I ate the rest of the bag. I’d only ever had lychee one other time (as part of a mixed drink in France), and these tasted exactly the same (as the fruit, not the drink). I love when candy tastes like fruit, which is kind of silly because I could just eat the fruit, but it’s more fun to eat candy.

Kasugai was founded in the 1920s in Japan and is known for their snack foods as well as their candies.

Ginger Paste from House Foods // I still have yet to try this one, but I definitely look forward to mixing it with soy sauce or into some of the different dishes I make at home.

Caramels from Morinaga // These were adorable little, individually-wrapped caramels. I’m not a huge, huge fan, but M devoured them about as quickly as I did the lychee gummy candies.

Morinaga milk candies have a really interesting history having been around for close to a century (according to Wikipedia) and they played a big role in the way that Valentine’s day is celebrated in Japan. In the 1960s, they advertised that chocolates should be given to men on V-day and even created chocolates just for women to give to men called gyaku-choco (reverse chocolates).

Okonomiyaki mix from Otafuku Foods // I made this right away (recipe coming soon with our variation on it) and it was as good as I hoped it would be. It’s relatively quick and easy to make and it is just delicious.

Seaweed Paper from Takaokaya // I love sushi and I drag M out with me whenever he lets me. I also often make vegetarian sushi at home in mass to bring to work as lunch. This seaweed paper is a little too small for me to make sushi, but I can always throw some of my favorite ingredients in with some rice and crumble this up on top. Close enough, right?

Takaokaya was founded in Japan in 1890. They harvest seaweed from the ocean and use a rack drying process similar to that of paper making to create their products. You can read more about their process here.

Blueberry Matcha Green Tea from AOI // AOI Tea Company has a 100 year history of manufacturing matcha tea. Their teas go through a rigorous quality control process including tastings by tea sommeliers. In addition to its use as a tea, matcha tea can also be used as an ingredient in a variety of dishes.

Yamaimo Soba Noodles from Ishiguro // These noodles are made from yam and buckwheat and are said to have a nutty flavor. They are a traditional style noodle from the Hokkaido Island in Northern Japan and are either served in a broth or as a cold salad.

Hokkaido is Japan’s second largest island and it is the largest of the country’s prefectures. It’s capital is Sapporo.

I was given the above products by Try the World in exchange for a review. All thoughts and opinions are my own. Please note that I do not recommend products or services that I do not believe would be a good fit for my readers.