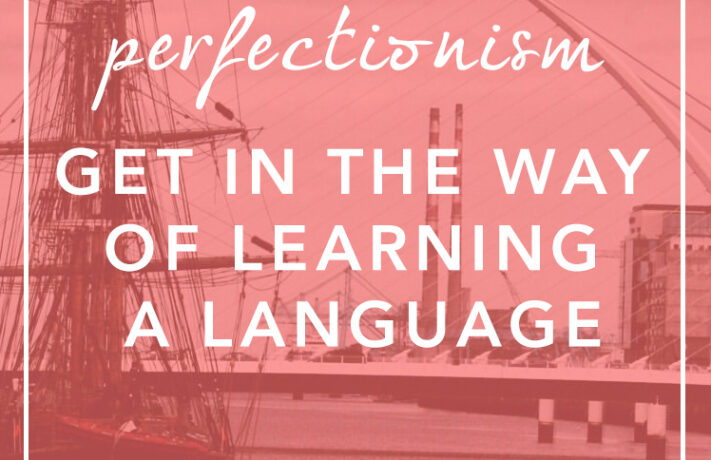 “Perfectionism is not a quest for the best. It is a pursuit of the worst in ourselves, the part that tells us that nothing we do will ever be good enough – that we should try again.” – Julia Cameron

We often want things to be perfect – the way we speak, our overall comprehension of a language, the body language we use, the timing of our jokes, our understanding of idiomatic expressions, the way we present ourselves to native speakers of our target languages. The list can go on. We’re often tempted to strive for perfectionism, particularly when we’re aiming for that tantalizing goal of “fluency”.

But the truth is, perfectionism can stop your learning in its tracks. It can hold you back, paralyze you and keep you from moving forward with not only your speaking, but in your progress with the language as a whole.

“At its root, perfectionism isn’t really about a deep love of being meticulous. It’s about fear. Fear of making a mistake. Fear of disappointing others. Fear of failure. Fear of success.” ― Michael Law

There Is No Such Thing As Perfect

All of this, of course, is not to say that you shouldn’t strive to do your best with the language you’re studying. But your best doesn’t necessarily have to mean perfect. For 99.99% of language learners out there, there’s really no such thing as perfect. In fact, for native speakers there’s really no such thing as perfect. Native speakers and learners alike make mistakes in the languages that they speak. In fact, you could technically argue that I made one by using a double negative in the first sentence of this paragraph!

At some point or another, even the most accomplished language learners have listened back to past recordings or videos of themselves speaking and noticed things that they wished they’d done better, no matter how well they thought they were doing at the time.

Perfectionism can hinder any part of your language learning, but it can especially hold up your progress when it comes to speaking a language. When it comes to speaking, we often feel an added pressure to speak “perfectly”, as though we’re being judged on our performance in the language. Our accents and pronunciation need to be on par with native speakers, our grammar flawless, and our vocabulary impressive.

But that’s not actually the case.

As long as you can make yourself understood and you can understand what’s being said to you, then you’re doing a pretty good job.

You can get lost in the preparation stage, never giving all your hard work in a language a chance to see the light of day. And that’s an opportunity all the effort you’ve made deserves!

No matter how much preparation you do, you’re going to make mistakes. It’s bound to happen. And it’s okay.

If You Wait For Perfection, You’re Missing Out

Everyone worries that not waiting until their ability in a language is perfect that they’ll be judged, mocked, rejected, shut down, or even shunned. But that will only happen if you let it.

The other people that you meet, particularly those that are a part of the language learning community, are too busy doing their own thing to make you feel embarrassed about your language skills. In fact, they’re probably just as preoccupied with their own faults to really notice yours. And as long as you show that you’re making a sincere effort to do your best, grow, learn, improve, connect, and share what you’re doing, then native speakers and other learners will support your efforts. (Or at the very least, not make you feel bad about them.)

Enthusiasm and hard work are far more essential to your success than perfectionism. You can’t be afraid to make mistakes. In fact, much like Benny Lewis, I would even argue that we need to make more mistakes. We need to feel a bit embarrassed or a bit frustrated and sometimes we even need to feel a little bit angry with ourselves because that’s what motivates us to get better.

It’s very unlikely that you’ll ever be the best. There will almost always be someone just a little bit better than you. Accepting that along with the fact there is no such thing as perfect can be one of the most liberating experiences you’ll ever have.

At some point in our lives, we all get weighed down with self-doubt, wondering if we’ll ever be good enough. These thoughts can be overwhelming, and more often than not, lead us to putting things on the backburner. We tell ourselves that we’ll be ready later and that we just need more time.

Over-analyzing where you’re at and where you think you should be will only prevent you from achieving success.

“If you wait for perfect conditions, you will never get anything done.” ― Ecclesiastes 11:4

And when you think about it, life is two short to wait to do the things you want to do. You just cannot wait for perfect. If you do, you’ll miss out on all of those experiences you were hoping to have by waiting for perfect.

A Personal Example of Why Mistakes Don’t Matter

I’ve told the story about how I met one of closest friends before, but I’ll share it once more.

A while back, not long after I started studying Mandarin, I was out shopping with my mom. She was in a dressing room trying on clothes, while I waited for her just outside the door. In the room next to her, another pair of daughters were doing the same with their mother.

They were speaking Chinese.

I really wanted to say something to them, but as you all know, I’m an introvert. The idea of opening my mouth stressed me out. It probably took me about ten minutes to work up the courage, but the point is, I did work up the courage to speak to them.

As the mother exited the fitting room in a new dress, I looked over and said:

For those of you who speak Mandarin, you may notice a pretty notable mistake in the sentence above. I used the measure word 个 instead of the proper measure word for clothes 件. Mistake. And there might even be a completely different measure word that’s appropriate for talking about dresses. I didn’t know. And quite obviously, I still don’t know.

But did they notice?

And even if they did, they understood me. And now, because I spoke up, I have a really great friend.

Mistakes Are a Part of the Process

“Understanding the difference between healthy striving and perfectionism is critical to laying down the shield and picking up your life. Research shows that perfectionism hampers success. In fact, it’s often the path to depression, anxiety, addiction, and life paralysis.” ― Brené Brown

Mistakes are all a part of the journey to become a better language learner and a better person.

This is why now, more than ever before I’ve become an advocate for the Fluent in 3 Months Speak from Day 1 approach.

In the past, I preferred to study and work hard at a language on my own, but this lead to me never really being able to speak those first languages I was learning (namely Arabic and Spanish). Because I wasn’t out there speaking, I was never getting any feedback on my progress. This made it really hard for me to stay motivated because it was basically impossible for me to really see any difference in my learning.

I had no way of knowing which of my strategies worked and which didn’t because I wasn’t putting any of what I learnt to use. And that’s where I think Benny Lewis’ (of Fluent in 3 Months) new #languagehacking guides really come in handy.

Benny Lewis recently released a series of four language hacking guides in partnership with Teach Yourself for German, Italian, French, and Spanish. I had the pleasure of previewing the Italian guide as a part of the prelaunch Facebook group and immediately went out and preordered all four books after seeing what the series had to offer.

And you know what? I’m really excited about using the guide for Spanish. Surprise! That’s my next language!

I’ve learnt a bit of Spanish in the past, but I’ve never really taken it seriously or consciously put any effort into speaking it. I have a long history with the language, which I will explain at some point, but for all intents and purposes, I’m basically starting from the very beginning with the language.

Go Out and Make Mistakes

When Lindsay and I were studying Korean together, she told me that her goal was to make so many mistakes in the language per day. It was a great way for her to make sure she used and worked on the language regularly. It wasn’t to study so many flashcards or work through chapters – which are great goals – but they don’t mean anything if you don’t apply what you learn.

I had a slightly different goal. It was to use so many words/expressions in Korean each week when I had an opportunity to chat in the language. I sometimes forgot several of them, others ended up not making sense in the context of our discussions so I couldn’t use them, and I often was lost if the conversation went beyond what I prepared. Those are all mistakes in their own way, ones that were a little uncomfortable to make, but at least I gave it a chance.

I was able to work through a consistent stream of material, had the opportunity to actually use and instill a lot of it, and it gave me something to look forward to/prepare for on a regular basis.

But why would you put yourself out there and make mistakes when you can just do a lot of preparation and avoid the embarrassment of mistakes altogether?

Although you can technically argue that it’s better to do more preparation before you put yourself out there, I’d counter argue that by not using all of that material you’re learning, you have a greater risk of losing it and of making even more mistakes when you finally have that conversation you’ve prepared so long and hard for. And this, more so than those little, regular mistakes (which actually help you build up a thick skin against the embarrassment of making them), can be detrimental to your language learning endeavors. It will be far more discouraging than those little, regular mistakes could ever be.

So remember this. You don’t need to be perfect, you just need to get out there and use the language that you’re learning.

What are your thoughts on perfectionism?

What do you think about Benny’s Speak from Day 1 strategy? Have you had a chance to check out the Language Hacking guides?