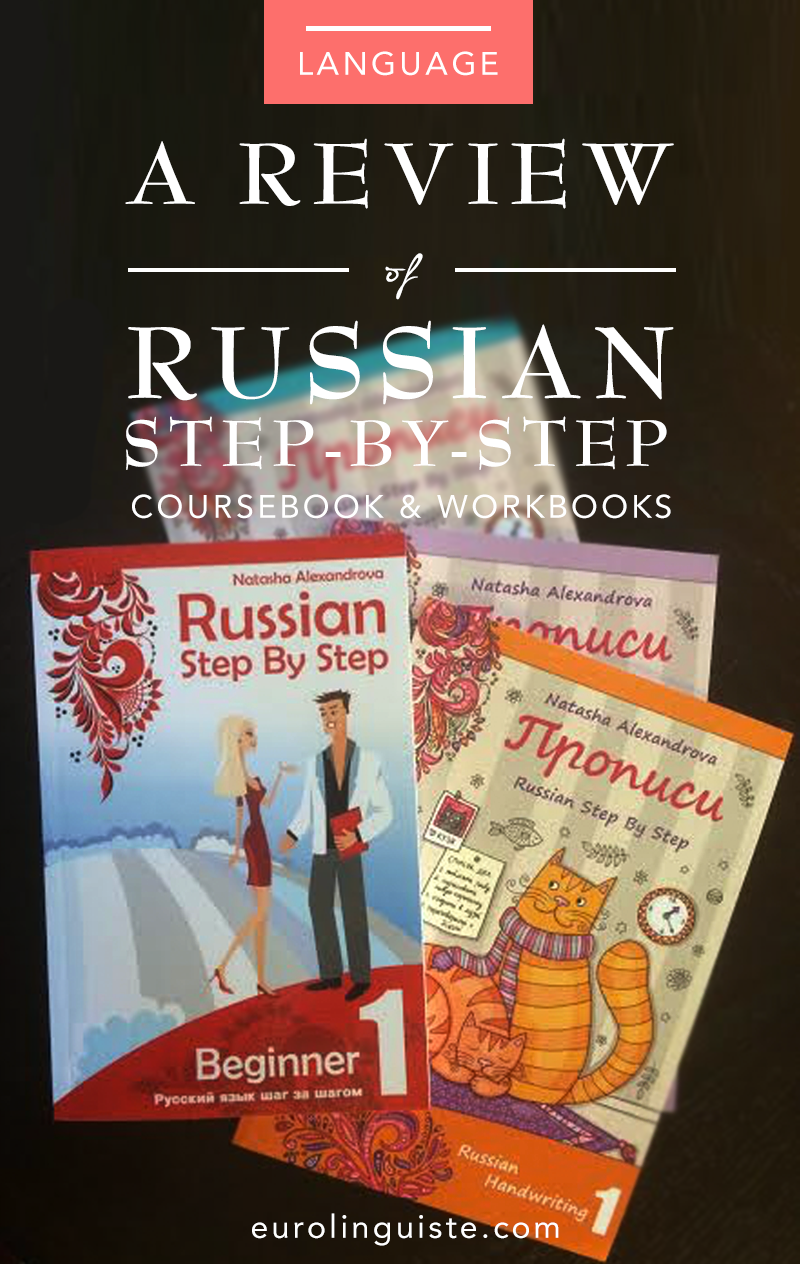 As I announced a short time back, I recently began studying Russian.

Of course, even though I started out ready and equipped myself with my Top 8 Resources, but I’m always on the lookout for new materials, especially those created by companies that specialize in particular languages.

I had seen Russian Step-by-Step on various social media channels, so when they contacted me, I was familiar with some of their products. I had fallen in love with their Russian cursive books (which you’ve seen me post about on Instagram), and I was eager to try out their hallmark publication, Russian Step-by-Step.

Russian Step-by-Step was written by Natasha Alexandrova, an educator with more than twenty years of experience. The books were assembled and developed by a team of native Russian-speakers and native English-speaking editors. It is a series of three books with supplemental workbooks.

I had the opportunity to work through Russian Step-by-Step Book 1. In this book, there are eight sections which include the pre-course (an explanation of pronunciation and the alphabet), the main course (21 lessons with texts, dialogues, and exercises), grammar, the audio script, the answer key, grammar tables, the dictionary (both Russian to English and English to Russian), and the index.

In addition to the material in the book, there is additional content available to you when you register on russianstepbystep.com including an audio download and a printout of all the vocabulary in the book arranged by chapter.

I started out with the pre-course because it took a rather thorough look at pronunciation and its various rules. This was really great for me because pronunciation is one of the things that I struggle with most studying Russian.

Lesson 1 dives straight in, using only the Russian alphabet. There are no transliterations. I, personally, think this is great because it immediately forces you (or maybe I should say encourages you) to level up your Russian skills. You really need to know the Cyrillic alphabet to work through this resource. At the same time, I could also see how it may deter someone still uncertain with the writing system.

At the beginning of each lesson, there are short, useful conversations that lead into an introduction to new vocabulary and some basic grammar. You’re then given tons of exercises that help you really instill the material. There is a strong focus on translation rather than fill-in-the-blank or multiple choice. The exercises are really created to help you process and internalize the new language material you’re learning and they don’t give you any “short cuts” that make it easier to forget the new material quickly. They estimate that each lesson takes approximately two to three hours.

The second lesson gets you going with adjectives, raising the bar on regarding the difficulty of the grammar. As you progress through the lessons, the dialogues get longer and short reading passages are worked in, so that you are continually challenged. Each lesson continues to introduce you to new words, slowly working in more advanced grammar points.

After every three lessons, there are also tests for you to complete. Each of these tests are translation exercises, English to Russian, which is definitely the more challenging of the translation possibilities (translating in your stronger or native language is typically easier than the other way around).

The Things That I Liked

Very little English is used in Russian Step-by-Step. You really only see it in the introduction, the short instructions before each exercise, and in the grammar section. Instead of relying on tons of English explanations,to guide you, Russian Step-by-Step provides you with several Russian language examples you can use for reference (in the dialogues and chapter introduction) that you can use for reference while completing the exercises. I really liked this aspect of the book because I feel it improves your flow as you work through the material. You can go into “Russian language” mode and have very little need for code-switching.

The way the book progresses feels really natural; there really weren’t any lessons or topics that jumped out at me as extraordinarily difficult or irrelevant. I would say that this is because of the way new concepts and words are gradually introduced. The author doesn’t suddenly throw something really complex or foreign at you, so the transition from lesson to lesson flows nicely.

I like that there is a separate audio script. It’s a nice refresh and good for both reading and lsistening practice, or just reading practice once you work your way through the lessons.

The diversity of the audio. The audio is recorded with both male and female voices by about seven different speakers. This makes for really great listening practice. The more voices and accents you hear, the better atuned you are to the language and the better your comprehension will be in real life settings.

The grammar tables. I usually draw my own grammar tables, so I love that this book already has them ready for me. I will likely still write them out myself later (I’m a firm believer that writing behy hand is a huge memory aid), but I like that they’re there for quick reference. I don’t have to fan through pages of endless notes to try and find that one table I created way back when.

The lesson audio is read at a nice pace and it is also spoken clearly. Each of the tracks has a short intro so that you know where you’re at in the book. There is a space left after each word or phrase is spoken for you to repeat what was said. This allows you to get some speaking practice in and it also provides you with the opportunity to emulate the pronunciation of a native speaker. Both good things.

Things That I Thought Could Improve

Sometimes exercises are big blocks of text and it’s a little overwhelming. Each question should be its own line. I can see why this might have been done, however, because the book is already quite thick. It saves space and makes the resource less intimidating.

The grammar section is on its own after the 21 lessons. I don’t really like that the grammar is separate from the lessons. It would feel better, in my opinion, if it were integrated into the appropriate sections of each lesson. The way that it is set up now requires quite a bit of flipping back and forth.

The audio for the alphabet in the pre-course is spoken a bit quickly and it chunks several letters together. I think it would be better if each letter was said on its own with space between it and the letter that follows.

You can hear background noise and clicks on the audio recording, but its not neither loud enough nor often enough to be distracting. Personally, it doesn’t bother me at all, but I just wanted to make note of it because there are other learners who are more sensitive to things like that than I am.

Regardless of the above, I definitely think that Russian Step-by-Step is still a quality product and worth your consideration if you’re learning Russian.

As a stand alone resource, I liked working with Russian Step-by-Step. Because it uses less English than what I’m used to and I enjoyed the challenge, it challenged me a bit more than some of the other resources that I’ve used. As someone who has studied with quite a few language learning tools, a resource that does things differently is always refreshing.

I’d also like to note that I absolutely love their Russian handwriting books. They are also a series of three books that are available on Amazon. I’ve had quite a few people ask me about them, and I totally recommend them if you’re looking to either improve your Russian handwriting or learn Russian cursive.

Would you like more language tips and reviews? Join me on Facebook for a great collection of both language and travel tips posted daily.

What are some of your favorite course books? In any language, not just Russian! I’d love to hear about them in the comments below!