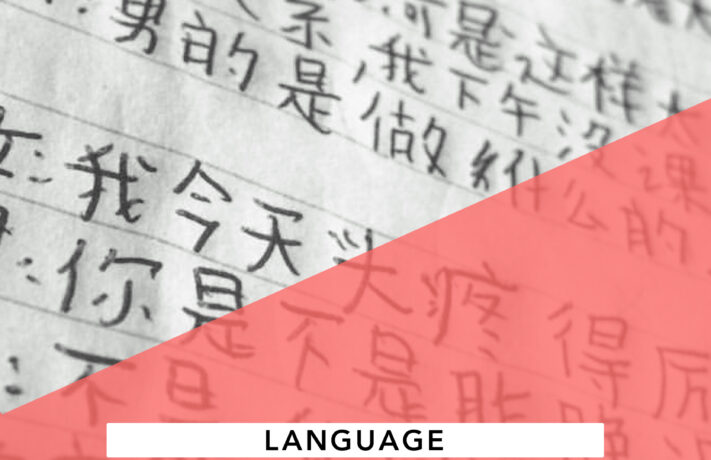 Welcome to the fourth Language Reading Challenge Update and Linkup! As a quick recap, you can check out the previous months’ challenges here:

The challenge this month was to read a book about a language that you’re learning, and as I announced earlier this year, one of my side projects for 2016 is to study a conlang (constructed language), so my first pick for this month fit perfectly. My second pick was about the history of the Russian language being taught in America and while it was a short book, it was certainly an interesting one. My final book for the month was an analytical reader on the Chinese language.

As I said just a moment ago, one of my side projects for 2016 is to study a conlang, so I was pretty excited to read about the use of language in science fiction, a subject that I felt tied in quite nicely.

Plus, I’m a huge fan of fantasy and science fiction in addition to language, so reading a book that discussed the two was right up my alley.

And I adored Aliens and Linguists.

The book was published in 1980, so it is a little outdated. I would definitely like to read something more recent on the same subject. However, the book was still a fascinating read. It also doesn’t focus solely on conlangs, but on the use of language in science fiction in general (including English and other modern languages).

I enjoyed learning more about the use of language in science fiction, on the general evolution of language over time and so much more.

At the beginning of the book, the author pointed out that the average reader is able to navigate their way through explanations of science heavy texts – “it’s high school physics!” he writes.

Linguistic matters, on the other hand, face a much different situation. The writer cannot presume that the reader has a basic understanding of linguistic information such as phonemes, and in result, one arguably cannot be too demanding of authors when it comes to the discussion of language in science fiction.

This, he reasons, is why we’re given descriptions of language that are along the lines of “harsh” or “broad” rather than through more technical terms.

That’s not to say, of course, that science fiction and fantasy do not contain a wealth of linguistic treasures tucked away within the genre – quite the contrary! There are some fantastic examples of authors who write well about language in their stories.

In studying the genres of science fiction and fantasy, I’ve learnt that science fiction authors each tend to have their “specializations”. There are those who write beautifully about military-oriented topics, those who are masters of political intrigue and still, others who are linguists at heart. Tolkein would probably fall nicely into that last category.

Aliens and Linguists discusses the languages that have been invented in science fiction and the extent to which the authors developed them, but more notably, it covers the ways in which language appears within the genre in general. There were things pointed out (such as the fact that more often than not, aliens learn our language rather than the other way around) that made me realize there is a really wonderful gap to fill in the genre for present day authors. I also found it quite interesting that many authors give quick explanations of how communication was managed between groups that should have been entirely unable to communicate (“oh we learnt your language from listening to your radio recordings”, “oh even though it’s 5,000 years later, the English language hasn’t evolved”, and so on).

Aliens and Linguists appears to be pretty academic in form and so it’s probably not a quick and easy read. But that doesn’t mean it’s not as entertaining as it is informative. If you’re interested in language and science fiction, this is definitely something I’d recommend.

The Analytical Reader. a Short Method for Learning to Read and Write Chinese by W.A.P. Martin

The Analytical Reader is essentially a frequency word list created based upon texts read by the author. The introduction was interesting and I enjoyed comparing my current vocabulary to the most frequently used words from 1803.

Again, the transliteration was different from the pinyin system I’m comfortable with, much like the book I read last month to fulfill the requirement of reading a book in your target language, but most of the characters on the list were familiar to me so it was interesting to see how the transliteration differed.

America Learns Russian: a History of the Teaching of the Russian Language in the United States by Albert Parry

My parents bought me America Learns Russian as a gift for Christmas and it’s been sitting on my desk as something I’ve wanted to get to since. This month finally gave me a good excuse to read it (not that I really needed one) and it was as fascinating as the title implies.

The book begins with a chapter on Russian America, detailing the efforts of early Russian settlers in Alaska to teach Native Americans the Russian language. It also discusses, to some degree, the necessity most Russians felt to learn the local languages while living in America.

The book is relatively short, so it’s easy to get through in just a few sittings. Again, it is somewhat academic in voice and seems as though it was intended for university use (it was published by a university, after all).

If reading about language education interests you, this book is definitely for you. Even though its focus is on the Russian language, it covers how language was taught and learnt throughout America’s history.

3. Follow the hosts: Shannon from Eurolinguiste, Lindsay from Lindsay Does Languages, and Alex Gentry from The Language Voyager.