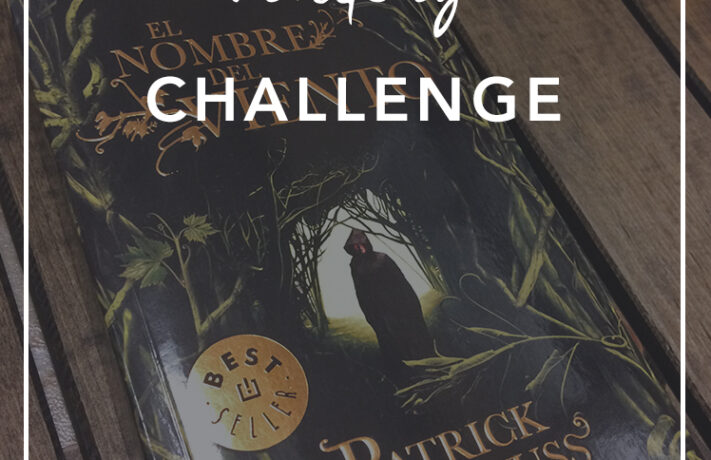 Welcome to this year’s second post as a part of the Language Reading Challenge.

As a quick recap, here are the books we’ve read so far this year:

January // Book about your native language

The guidelines to participate are available here and you can also join up by commenting on the posts here at Eurolinguiste or by becoming a part of the group on Goodreads.

This month, the challenge was to read a book in your target language (translation of a book from your native language). So I chose to read a book by one of my favorite authors, Patrick Rothfuss. The title of the book in Spanish is El Nombre del Viento, or in English, The Name of the Wind.

I’ve mentioned before that I love reading fantasy/science-fiction. It’s one of my many favorite genres and lately, it’s become one of my best language learning resources for when I hit that intermediate/advanced stage in a language.

Patrick Rothfuss became one of my favorite authors in the genre for a variety of reasons (his craft, his storytelling style, the list goes on…), but more notably, the fact that his protagonist is a language-learning musician. I couldn’t relate to a character any more than I do with Kvothe if I tried.

When I was browsing his shop, The Tinker’s Packs, I first discovered the Croatian edition of his book, then went on to see that they had several translations of his work available. After the difficulty of getting Game of Thrones in Croatian, seeing a book that I love in the language so easily available had me floored and I knew that I had to get it. I then wondered what other languages his books were translated into and started making my wishlist.

Through the Tinker’s Packs, I could get his books in Spanish, Chinese, Korean, French, Russian, Croatian, Italian, Catalan, Czech, Hebrew, Greek, Finnish, Dutch, Japanese, Lithuanian, Norwegian, Polish, Portuguese, Serbian, Slovak, Slovenian, Swedish, Turkish, German, Estonian, etc. Granted, I don’t speak all of those languages, so it was easy to narrow the list down, but I still ordered the books in Korean, Chinese, Russian, Spanish, and Croatian. Plus, my purchase went towards helping out the Worldbuilders charity which was a pretty big plus.

So back to The Name of the Wind.

The Name of the Wind is the first book in Patrick Rothfuss’ Kingkiller series. Kvothe, the main character in the book, is quick-witted and sharp-tongued, a university student and a talented musician. Like much of modern fantasy, The Kingkiller Chronicles, has several invented languages. And in the first book, Rothfuss uses different languages to illustrate the relationships between characters, to further embellish scenes, and to world-build. He talks somewhat about the language learning process, but not as in-depth as he does in the second book (so I’ll save that for later).

Some of my favorite bits about language learning:

– The use of the Temic language between Kvothe and Bast to show their friendship. In an early scene, Kvothe switches into the Temic language to joke with Bast, and the banter is well-employed. The main character also uses language to sometimes establish rapport with other characters – much in the same way we do (‘Hey, look, I speak the same language as you! Let’s be friends!’).
– The Chronicler’s shorthand writing system which Kvothe picks up within moments. This was used to show Kvothe’s aptitude for languages and the description of the shorthand system is just vague enough to sound like it could exist.

“Did you really learn Tema in a day?”

Kvothe gave a faint smile and looked down at the table. “That’s an old story. I’d almost forgotten. It took a day and a half, actually. A day and a half with no sleep.”

“Did you learn the whole language?”

“No. Of course not,” Kvothe said rather testily. “Only a portion of it. A large portion to be sure, but I don’t believe you can ever learn all of anything, let alone a language.”

“That I can answer,” Ben said. “Seven. You can hold to that with some certainty. It’s part of their name, actually. Chaen means seven. Chaen-dian means ‘seven of them.’ Chandrian.”

“I didn’t know that,” my father said. “Chaen. What language is that? Yllish?”

“You’ve got a good ear,” Ben said to her. “It’s Temic, actually. Predates Tema by about a thousand years.”

– The fact that people who speak different languages in the story don’t have magical total mastery of the primary language of the book.

“…coterie.” He pronounced the last word slowly. “Is that the right word? Coterie?”

I nodded, and Wilem looked vaguely self-satisfied. Then he frowned. “That makes me remember something strange in your language. People are always asking me about the road to Tinuë. Endlessly they say, ‘how is the road to Tinuë?’ What does it mean?”

I smiled. “It’s an idiomatic piece of the language. That means—”

“I know what an idiom is,” Wilem interrupted. “What does this one mean?”

“Oh,” I said, slightly embarrassed. “It’s just a greeting. It’s kind of like asking ‘how is your day?’ or ‘how is everything going?’”

“That is also an idiom.” Wilem grumbled. “Your language is thick with nonsense. I wonder how any of you understand each other. How is everything going? Going where?” He shook his head.

“Tinuë, apparently.” I grinned at him. “Tuan volgen oketh ama.” I said, using one of my favorite Siaru idioms. It meant ‘don’t let it make you crazy’ but it translated literally as: ‘don’t put a spoon in your eye over it.’

– Just the fact that Patrick Rothfuss put that much thought into his characters speaking different languages, learning different languages, and that they’re always learning no matter how well you speak a language. It definitely beats some of the other portrayals of language learning I’ve read where characters just magically pick up a language without any effort or prior experience. It’s refreshing to see something more authentic.

Because you gain different things by reading both.

In reading works originally published in your target language you get to benefit from the language. As I mentioned above, things are written completely different when they are originally conceived in a language rather than translated into it.

That being said, reading translations gives you the opportunity to work with material you know and love (like Patrick Rothfuss’ work for me). This is so valuable because it increases the odds that you’re going to enjoy the tools you’re using to learn your target language because you aren’t just using boring old textbooks or flashcards to learn a language. You’re actually ‘living’ in the language and using materials that you enjoy.

1. Share your post discussing the book that you’ve read this month. Submissions unrelated to the theme or links to your homepage will be deleted. You can use the linkup below or just share in the comments.