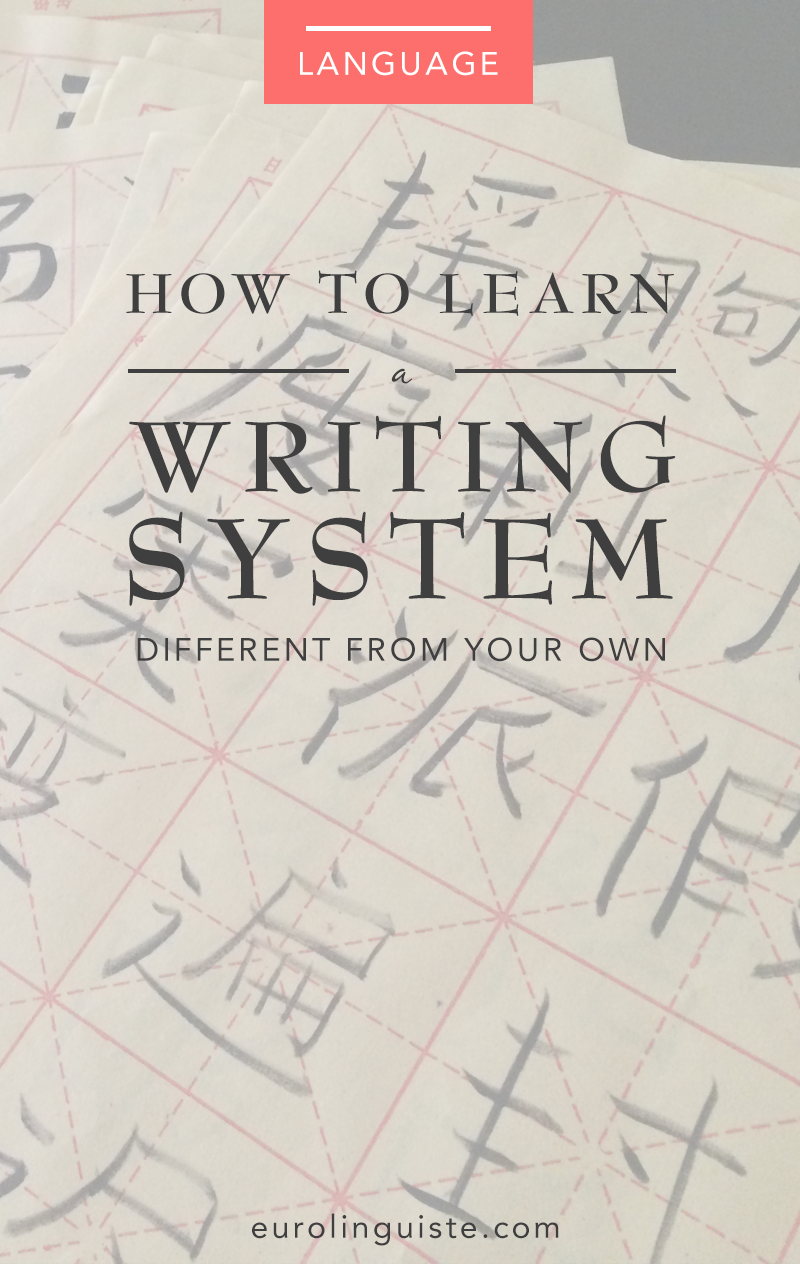 First, I wanted to say that this post was inspired by Justin G who wrote me an email to ask about this very topic. So, hi Justin! Thanks for the inspiration behind this post. I hope you don’t mind that I used some of my response to you to write it!

His question was: “I was wondering if you have any tips when it comes to learning a language that does not use our alphabet.”

This is a really great question, and I’m sure that there are others out the wondering exactly the same thing. In fact, it’s certainly something I would have loved to know when I was at this stage, so I’m going to share a few of the things I’ve learned along the way.

A Little Bit of My Background

I’ve now studied three languages with different writing systems – Arabic, Chinese, and Russian, in that order. For both Arabic and Russian, I’ve learned to read the writing systems, while Chinese is still a work in progress. I’ll explain why I’ve picked up reading and writing in my newest language faster than Chinese, a bit later, but for now, I wanted to share my experience learning both alphabet and character-based writing systems.

I started learning Arabic in school at the age of 15 and I was taught the writing system along with the rest of the language in a classroom setting. It took me a little longer than I would have liked to learn the alphabet, likely due to the way in which I was taught it, but I did eventually learn to understand the writing system. And forget it not long after I finished my course. Today, I could probably identify maybe three or four letters.

But I’ve learned from my failure at learning a language with a different script and I’ve had more success since.

I recently began studying Mandarin a year ago and waited a few months into my study to incorporate the writing system into my learning. While it delayed my ability to connect the written language with the spoken language, I honestly feel it was the best way for me to study. It gave me the chance to fall in love with Chinese (and was thus grow committed) before I took on the intense task that is learning to read in Chinese.

Lastly, and most recently, I started studying Russian. I wasn’t happy with the way I was taught to read and write Arabic in school, so I decided to dedicate my first week of learning Russian to memorizing the alphabet. I initially didn’t find any one way that worked for me, but after printing out my worksheet and using it for reference for a few days, I found that I very quickly was able to sound out words (albeit slowly) without any help.

Learning a language with a writing system different than your own adds another level of difficulty to the language you’re learning. But spending the time to learn the writing system of the language that you’re studying at the beginning can be a huge advantage to you.

[Tweet “Learning your target language’s writing system from the start can be a huge asset to your studies.”]

Keep in mind that not all writing systems are alphabetic.

For me, going from an alphabet-based language to a syllabic/morphemic based writing system was pretty intense. One of the biggest issues I’ve had learning a syllabic/morphemic based system that employs characters, like Chinese, is that there is really three things that you need to memorize – the sound of the character, how it looks, and the translation of the character so that you know what it means.

In fact, if you really wanted to, you could learn to read in Chinese without ever learning how the characters sound. You would just need to memorize the meanings of the characters in your target language and you would be able to read Chinese texts. I really don’t advise that you do this – I feel it kind of misses the point – but it is possible.

Because of this, when I first started reading in Chinese, I often translated the characters directly into English, skipping their Chinese sounds and meanings altogether. It became a huge problem for me because I wasn’t able to connect the written language with the spoken language in my head.

It was too much for me at the beginning, so I decided to wait until my foundation in the language was stronger and I’m glad I waited.

Should I Learn to Read and Write Right Away?

When it comes to languages with different writing systems, there are arguments both for and against learning to read and write while learning to speak and understand the language. I’ve tried both ways, so I feel that, while this is a decision you need to make on based on your own learning goals, I can provide you with a few things to consider.

For languages like Russian or Arabic which employ alphabets, my advice is to learn them right away. My first week learning Russian was spent memorizing its alphabet and nothing else. It has done wonders for my Russian study.

On the other hand, for writing systems like Chinese’s hanzi, I preferred to wait. The language itself was already drastically different from anything else that I had ever learned and trying to add the writing system to the equation too early on only overwhelmed me. I ended up waiting a few months to really begin studying it and I think it benefitted both my speaking, reading and writing because I wasn’t trying to do too many complex tasks at once.

Language Learning Reading Challenge (in Partnership with Women in Language)

Transliteration is a great tool when you’re just getting started with a new writing system. If you’re unfamiliar with it, transliteration is essentially rewriting the words from your target language using the characters and sounds from your own alphabet. By doing so, you can understand how the word in the new language would sound and my early Mandarin notes contained the transliteration (or pinyin) for every character.

As an example, “Спасибо” in Russian could be transliterated into English as “Spasiba” or “Spasibo”.

Things to Watch Out For While Learning a New Script

False Friends / / Some alphabets employ characters that may look deceptively similar to those you may already know. For example, in Russian “B” is actually the equivalent of “V” in the English/Latin alphabet.

Trying to Jump in Too Far Above Your Level // Take it slow. It’s okay if you read slow and sound like a two year old sounding out each part of every word. You’re essentially starting all over again with a new system (and your old system may even try to influence your ability to learn the new system), so it doesn’t

Tools That I Use to Study New Writing Systems

I never use any one source for any aspect of language study and learning new writing systems was no different. I think that using a variety of sources is a really great way to really ensure that you understand what you’re learning because you’re going to see the information in a variety of contexts.

Here are just some of the tools that I use to study the writing systems of the languages that I study:

1. Assimil // For languages like Russian, I really like Assimil because they have recordings of the sounds of the characters or letters that you’re going to need to recognize later on. I like being able to associate the verbal with the visual, so this was really great for me with Russian.
2. Memrise or Anki // I like to use Flashcards like Memrise to study the characters. Both systems are based on spaced-repetition and so you really get good practice in. I use high-frequency word/character decks and basic alphabet decks as well.
3. Single Page Worksheets // When it’s possible, I like to have a one-page printout of the alphabet to use as a reference sheet. Having all the letters/characters visible on one page with their pronunciations really helped me when I started out.
4. Writing Practice // I bought Chinese calligraphy paper online so that I would have the chance to practice writing characters neatly (they aren’t so neat when I’m squeezing them into my college-ruled notebook) and I love my books from Russian Step-by-Step to practice Russian cursive. I find that the more I write characters by hand, the better I retain them. Typing them just doesn’t do it for me.
5. Reading // I didn’t realize it was what I was doing with the previous languages I studied, but once Jared of Mandarin Companion introduced the term “extensive reading” to me, I discovered that it was a technique I had been using all along. To make a long story short, extensive reading is essentially reading texts where you understand 90%+ of what you’re reading and only have to focus on picking up the new 10%-. While it’s easier to do in languages that share an alphabet with your own language, reading is an important way to really improve your writing and reading in a new language. Graded readers are the perfect way to get started in a new script and I have had great success with Mandarin Companion for Chinese. Once you get to the intermediate level, I recommend dual language books. There are several ways these books can be laid out, but for new scripts I recommend something like Interlinear books.

And if you’re looking for a bit of inspiration learning a new script, check out Lindsay Dow’s Language Script Challenge.  I don’t know how she does it!

So there you have it. Some of the techniques that I use to learn a new writing system. Have you learnt a language that uses a writing system different from your own? How did you go about learning it? I’d love to hear all about your experiences in the comments below!