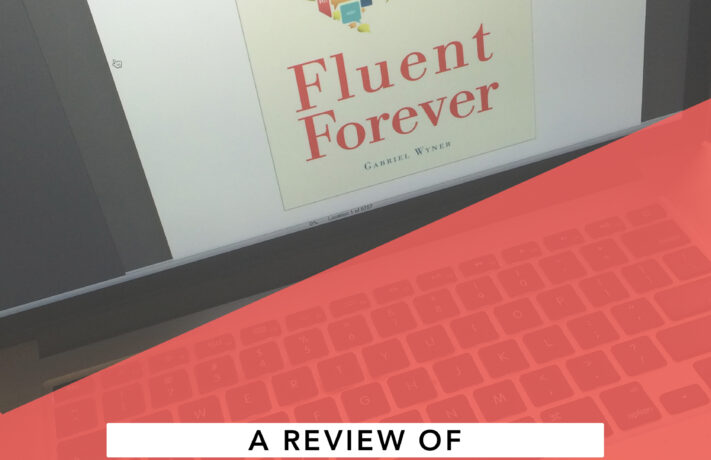 Welcome to the sixth official Language Reading Challenge Update and Linkup! As a quick recap, you can check out the previous months’ challenges here:

The challenge for this past month was to read a book written by a language blogger. A quick shameless plug for those of you who have not yet finished this month’s challenge… but I recently released a book that was published by Fluent in 3 Months entitled “Say Goodbye to Shy” and you can pick up a copy here.

Since I wasn’t going to review my own book to complete the challenge, I opted to read “Fluent Forever” by Gabriel Wyner. I’ve heard several interviews with Gabriel in the past and have read articles written by him around the web, and so, I was curious about his book.

Learning about Gabriel’s approach to language learning was pretty interesting. The book focuses quite a bit on the creation of flashcards. And if I’m totally honest, I’m not sure if his method would be right for me. He emphasizes the importance of creating your own flashcards and of avoiding the use of your native language on your cards, and while I can see how his method could be effective, I personally don’t feel as though I energy to really take on his flashcard process. Plus, what I’ve been doing (using a mix of my own flashcards and flashcard sets created by others) seems to work pretty well for me. Yes, it’s possible that I could be more effective in my learning, but as with most things, you have to find a balance and I don’t think Gabriel’s method would offer me the balance that I need to stay motivated in my studies.

However, I can see how his flashcard method could be really effective for other learners, and in his book, he explains his process in great detail. So if you’re current methods for learning new grammar or vocabulary aren’t working for you, then Fluent Forever might be worth checking out for his suggestions alone.

In Fluent Forever, Gabriel also emphasized the importance of pronunciation, stating “people with strong foreign accents are frequently treated as less adept at the language (and less intelligent as a person) than they are.” As unfortunate as this is, I’ve found it to be pretty true, especially for those that aim to achieve a high level in their target languages. Outside of the language learning community, where our fellow learners tend to be pretty understanding and patient with any errors we may make, pronunciation matters a lot. Particularly when it comes to either living or working in a country that speaks your target language.

Because of the importance he places on pronunciation, he spends quite a bit of time discussing ways that language learners can work on improving this particular skill and I feel that his suggestions are quite helpful.

Another point that Gabriel made in Fluent Forever that I really agree with is that “it’s hard to unlearn bad habits.” This is something that I tell my music students all the time. I compare their skill on their instruments (their “habits”) to digging a trench. If they start digging in the wrong direction, they end up having to do three times the work. If you dig in the right direction, you only have to dig once. If you dig in the wrong direction, you’ve 1) done digging you didn’t need to do, 2) now need to fill up the hole that you’ve mistakenly created so that you don’t fall back into later, and 2) now need to spend the time digging in the right direction. This is why I feel that working with a tutor is so important because if your trench is being formed in the wrong direction, they can point it out quickly so that you don’t have too deep a hole that you need to fill.

To close out, the part of the book that I most enjoyed was Gabriel’s analysis of why children are said to be better language learners than adults. It was really the most thorough look at this that I’ve seen so far and I was really impressed with the conclusions he drew. To share one of my favourite quotes from this section: “If we had Spanish-speaking adults talking to us for twelve to sixteen hours a day for six years, we would probably speak Spanish at least as well as your average Spanish-speaking six-year old.”

In all honesty, the majority of what was in the book were concepts and techniques that I’ve heard Gabriel share elsewhere, so the material wasn’t really new to me. The book did elaborate on a few things more in depth than I’ve seen/heard them in other places, so if you were already interested in the techniques he advocates, this book would definitely be a good follow up for you.

3. Follow the hosts: Shannon from Eurolinguiste, Lindsay from Lindsay Does Languages, and Alex Gentry from The Language Voyager.