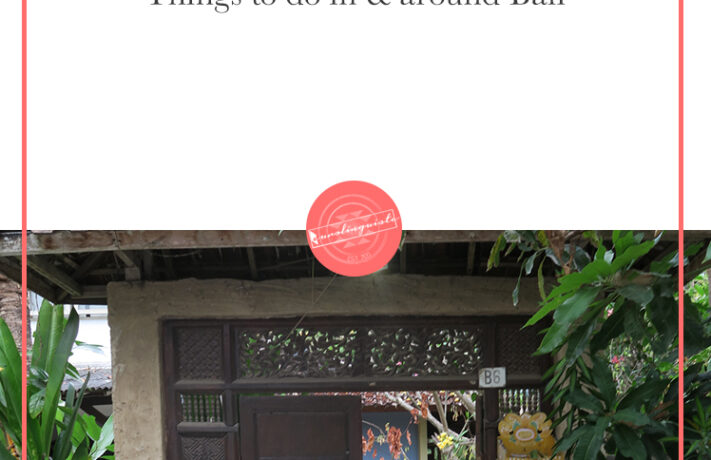 This past year, I was lucky enough to visit two countries that I had not yet explored – Indonesia and Singapore.
It is the former that I’m featuring in this photo roundup.

Though I didn’t have the opportunity to spend much time in Seminyak, Bali, Indonesia – three nights and two days –
we did get to travel from one side of the island to the other. West to East.

We were booked for a scuba diving trip, but due to volcanic activity, our original dive site was changed. The volcano didn’t erupt until almost two months after the seismic activity started, but even while we were there, there were restrictions around traveling near Mount Agung.

When we arrived, the people were hospitable, the food delicious, and the views breathtaking. It is certainly no wonder why so many expats have made it their home.

Some of the interesting things that I learned about Bali while we were there were:

1. Nearly every home had its own temple. Including where we stayed (which was a home that was converted into a hotel for guests). Some were larger and more elaborate than others, but regardless of their size, they were impressive.

2. Entryways are often these elaborately carved columns that looked as though they had once been a single column that was split down the middle and pulled apart.

3. The food was delicious and there is no such thing as too much coconut (at least in my opinion).

5. Wikipedia lists four volcanoes in Bali, but Indonesia as a whole has around 139. That’s a lot of volcanoes!

What are some of the things that you’ve learned about the places you’ve traveled to? I’d love to hear about them in the comments below!

Previous post:
Learning French with Lingoci | My Experience as an Advanced Learner
Next Post:
A Beginner’s Guide to the Japanese Language