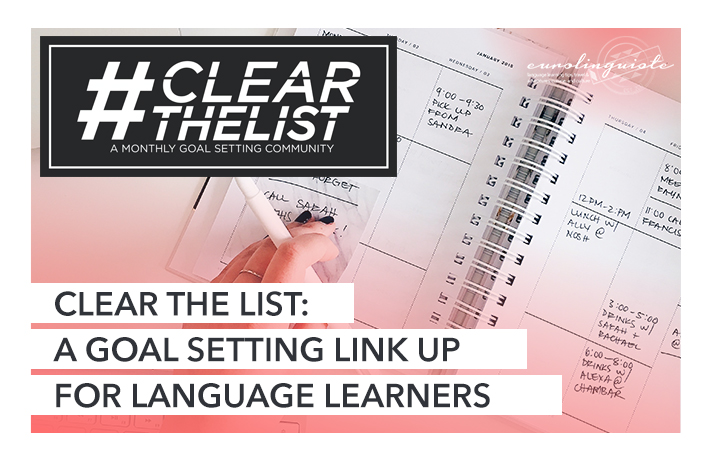 Each month I check-in on the work I have been doing in the various languages I am studying, sharing the resources and methods I have been using and where I am at with each language.

This month, due to other commitments, I have not had as much time as I would have liked to dedicate to language study. Aside from the two languages I use on a daily basis, I have not been doing much else. Last month was almost as busy and I missed doing my language update entirely (it was around then that my language study time began to decline).

I was busy planning and launching the 12 Deals of Christmas over at Teen Jazz, recording with Nivo Deux, two online classes, scheduling a trip back to Europe to visit family, performing every weekend, the holidays, and work-related training. Despite the fact that I have not really been studying languages the past two months, I will delve back into it this next year.

My Language Learning Strategies and Update

I asked for a few language learning resources for Christmas this year and I can’t wait to see which ones I’m going to get, but to give you an idea, here is what I’ve asked for:

1. Assimil Pack Le Croate // This language learning resource has been on my list for a few years, but it’s always been a bit pricey. Assimil is a French company that has a huge selection of language resources that I’ve heard great things about, but their Croatian book was out of stock in the US for a while. Thankfully, they just released a new version (April 2013), so it’s somewhat more affordable. Now that it’s available again, this is #1 on my list and someone may or may not have hinted that it will be under the tree this year!

2. Complete Croatian // I’ve heard good things about the “Teach Yourself” series, but I have yet to really try them out for myself. I’ve taken a quick look at a few of them while I was still in University and had access to the library in Belfast (which had a huge selection of wonderful language learning resources), but I haven’t really fully explored their resources. Since Croatian resources have been difficult to find, I’m definitely interested in trying out their “Complete Croatian” resource.

3. Le Trone de Fer // So this one is probably unlikely as a holiday gift, but I know what I’ll be getting in the spring when I am back visiting family. I have to admit, that one of the things I am most looking forward to when I’m going back to Europe, is heading into FNAC and going straight to their language section (that and buying some of my favorite books in other languages). I might just end up spending a full day wandering around the bookstore.

4. Aliens and Linguists // As mentioned above, I have been taking a few online courses and while doing research for one of them, I stumbled upon this text as a reference. I love fantasy and science fiction, so when I saw this, I definitely wanted to check it out. I mean, two things I love together in one book?! It has great reviews on Amazon, too. I only wish they had a Kindle version.

5. Croatian: Lonely Planet Phrasebook // The Lonely Planet phrasebooks come highly recommended by a number of language learners, and although I am not learning Japanese (currently), I own a copy of the phrasebook for it. I’ve found it really useful and I’m definitely interested in adding other languages to my collection.

Before I continue with my Christmas list, I need to share something with you all that I have previously only hinted at here on my blog. As promised, I am going to announce my 2014 language.

So, a few of the resources that I’ve learned about, courtesy of Ellen Jovin, are on my list as well.

6, Colloquial Chinese // Much like the “Teach Yourself” series, I’ve heard pretty good things about the “Colloquial” series of materials from other language learners and they have two levels for Mandarin so this is definitely something I’d like to check out and I think it will make a great starting point. If you have experience with either the “Colloquial” or “Teach Yourself” series, I’d be interested in your thoughts. You can contact me by email or leave a message in the comments below.

And, of course, last but not least:

8. Lonely Planet Mandarin Phrasebook // Much like I expressed interest in owning the Croatian edition in this series, I’d also like to get my hands on a copy of the Mandarin edition.

Of course, I’ll also be using other more listening and verbal resources as well. As much as I love books, nothing replaces real life use of a language. Conversing with native speakers and other language learners in the languages you are developing is the best way to improve. Books and grammars are there to supplement conversation (in my humble opinion).

The few things I have had time to work on in the last two months has included a small focus on four languages. This, of course, has not been equally divided amongst the four, but it is mostly because I am only prepping for one, exploring another, and actually developing two.

Italian – Italian is a language I began studying at University as was my primary focus through the end of 2012. My focus this last year was Croatian. As far as Italian, I’ve had almost three years to learn the language and due to much neglect, I have not until recently been making any real progress. Now that I’ve passed the point where I am done refreshing all the things I once knew, I am actually learning new things and developing basic conversation skills in the language. I’m using a combination of different materials and resources including podcasts, computer programs, language partners and workbooks. On the days that I studied these past two months, I usually listened to about an hour worth of podcasts per day (I listen to each about three times before I retire it to the archives) and I worked with computer programs such as LiveMocha and Busuu as well as a program that I bought at Costco similar to Rosetta Stone for about an hour a day as well. I tried to work out of workbooks about three to four hours per week and I have a one to two hour language exchange with a friend from Italy each week.

German – I have been a slacker and haven’t resumed my German lessons since the wedding (almost two years ago now). I know that I need to so that I get more experience using the language, but I just haven’t had time. I think this is one of the things that has been added to the “to do after I finish my album” list. I do, however, study German via workbooks or Duolinguo, Busuu or LiveMocha everyday, so I do get to regularly use the language even if it isn’t in conversation.

Russian – This past week I have started to learn the Russian alphabet which I have to admit is quite confusing! They have many of the same letters which represent different sounds and letters that are entirely new to me. The only thing that plays to my advantage is that it has some similarities to Croatian (i.e. greetings). Since Russian is the language I plan on starting next year, it will be interesting to see how I progress considering the fact that so much of it is so foreign to me.

Mandarin – I starting preparing for this next year’s language a couple months back using Pimsleur Mandarin and it was initially difficult for me (in comparison to the other languages I’ve started). Although I would love to say that it became easier as things went along, I cannot. I still have to listen to each Pimsleur lesson a few times more than I did with Croatian before moving on to the next one. Despite the struggle, I am really enjoying the language and I can’t wait to get to a higher level so that I can really use it!

As for the rest, I will hopefully have some news for the next update! If you are learning a language, what have you been working on? What language learning resources are on your holiday wish lists?