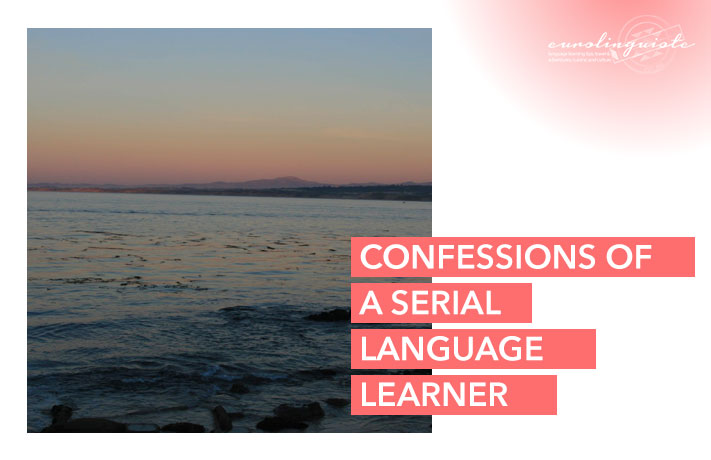 I’ve mentioned my personal experience and history with language learning in a few different posts. And I do my best to keep this page updated.

I grew up with exposure to Spanish but stopped hearing it at home at a really young age. I quickly forgot nearly all of it.

But I was never really satisfied with just two languages under my belt. At the age of 15 I began learning Arabic so that my friend and I could share a “secret”-to-us language at school. I loved learning the script, but I struggled with it and quit after a semester.

Not long after, I set a goal I kept to myself, worried about what people would say if I shared it with them. I decided I would speak 8 languages. But after my Arabic course, I didn’t really do anything to pursue it (music was becoming a bigger part of my life).

It was only at university while studying for my Master’s degree things changed. I needed to learn other languages for my major and I took the requirement seriously, taking courses for the suggested languages. It was then I realized how much I loved not only speaking other languages but the learning process itself.

I started on Italian, continued German (which I had dabbled in before), took up Croatian, and begged my roommates for one or two lessons in Mandarin (though again, nothing stuck). And that, with a few years in between, brings me to today.

Am I a polyglot?

A few confessions from a serial language learner.

Confessions of a Serial Language Learner

Being unable to avoid walking into any bookstore you pass just because you can’t keep yourself from perusing their foreign language section.

If there’s a book in the foreign language section that looks interesting, it’s impossible to avoid an impulse buy. #allthebooks!

Forgetting words in your native language as your brain makes room for words in your target language. It’s a thing. Your brain only has the capacity to hold many words and the more languages you know, the fewer words you are capable of knowing in each (I wish I had a link to the article I read on this). So make the words you learn count! Learn words that are relevant to you and the conversations you imagine yourself having.

It’s frustrating. Oh so frustrating when you realize you have the same sentence written in your notes five times. That means all five times you stumbled across it, it was new to you. Or when you chat with a native speaker and despite being able to speak to them, you do not understand a word they say. Or when you have entire conversations by paper because your reading and writing progressed so much more quickly than your speaking skills.

You have breakthrough moments that make every frustration and moment of self-doubt worth it.

Realizing you will never live long enough to learn all the languages on your list or read all the books in your “to read” pile.

Having to choose a finite list of languages because of the above.

The confusion of dreaming in another language.

How to Choose the Best Resources to Learn a New Language

The joy of realizing you dreamed in another language.

When you fill a notebook and can’t decide whether to keep it in case you need it for reference, copy your most pertinent notes into another notebook to condense and continue or just start over.

When you work on your language in a language app and they release a new language and that new language tempts you away from what you were working on. Or when you look at their list of offered languages and that temptation arises.

When you used to know more in a language. For some reason, you still think you are at the same level even though you haven’t practiced and get called out on it when someone shares that language and tries to speak with you and nothing comes out.

When suddenly the food you eat, the movies you watch and the music you listen to get on your significant other’s nerves because they are all in your target language and they don’t feel like reading subtitles or learning how to use chopsticks or eating with their hands or listening to that same k-pop song you have on repeat for the 100th time.

When you only intend to study for an hour and end up spending most of the day immersed in your target language, forgetting to write a blog post so you either skip blogging or throw up some travel photos instead.

When you feel like you should be progressing more quickly. The truth is, with language learning, and most skills, there is nothing quick about it. You can quickly learn certain facets of a language like specialized vocabulary, but to really become fluent or conversational (and retain it) it takes years. Anything else is like cramming for a test. You may pull it off but you can forget remembering it six months down the line.

If you’re learning (or have tried learning) another language, can you relate to any of the above? I’d love to hear from you in the comments! Or, if you have any of your own language learning confessions to share, feel free!