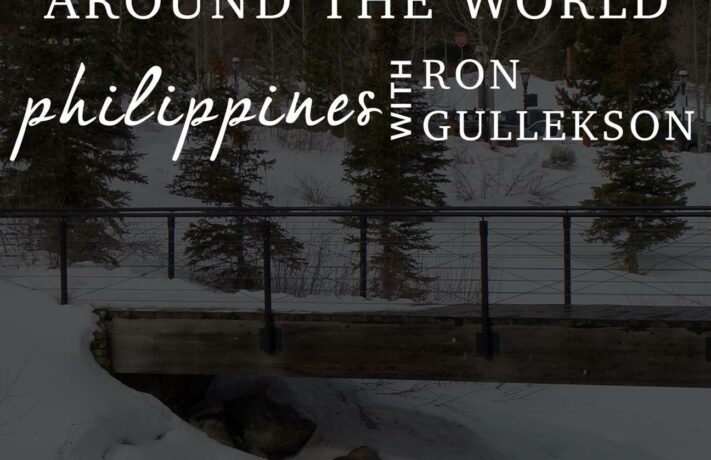 About the Author // Ron Gullekson is a ‘language enthusiast’ with a background in German, Spanish, Arabic, and English. He runs Language Surfer where he shares his advice to language learners and his progress with the languages that he studies.

Christmas in the Philippines

The Long Tradition of Christmas

In the 16th century, Spanish colonizers brought Catholicism to the Philippines. Now 85% of the Philippines’ 98 million people are Christian, making it one of the few predominantly Christian nations in Asia.

As such, Christmas is the tropical island nation’s most important holiday. The season lasts for four months, with decorations going up as early as September. In fact, Filipinos joke that the Christmas season coincides with the “ber” months: months that end with “ber.” (And we complain about hearing carols before Thanksgiving.)

I would guess that the reason Christmas is so popular is that it mixes four things Filipinos hold very dear: religion, artistry, family, and food.

One of the most important Christmas traditions is Misa de Gallo (Spanish name)/Simbang Gabi (Tagalog name), which is a series of solemn church masses held during the nine days before Christmas. Worshippers celebrate Christ’s birth and the Virgin Mary, and believe that if they attend all services, God will grant them a wish.

In many areas, actors reenact Joseph and the Virgin Mary’s search for someplace to stay. This reenactment is called Panunuluyan.

On Christmas Eve, Filipinos celebrate the Midnight Mass, like many other Catholics do.

One of the most common Christmas decorations is the paról, a star-shaped lantern. The paról is as important to Filipinos as the Christmas tree is to westerners (although you’ll now also find Christmas trees in the Philippines). The lanterns function to light the streets for people who are walking to the Simbang Gabi before the sun comes up.

Filipinos take pride in their paról lanterns and their lantern-making skills, even though many lanterns are now plastic with electric lights.

Filipinos also like to sing, so naturally caroling is a popular activity. Children go in groups from house to house, singing carols and playing homemade tambourines. The recipients of the children’s song reward them with coins.

Filipinos also pride themselves on their gift wrapping prowess, something I can testify to, having grown up with a Filipina mom. They put time and effort into the presentation of the gift, so they’d like you to notice.

After Midnight Mass, Filipinos gather together with family, exchange gifts, and eat the Buena Noche feast, which consists of–for lack of a better term–a spread.

On Christmas, Filipinos visit family, especially elders. Then they eat a festive lunch.

I put “family and food” together here because while menus may vary wildly, the love for family doesn’t.

But to Filipinos, no matter how much money you have, Christmas isn’t a time for moping. It’s a time for cheer and celebration. It’s a time to share what you have with the people you love.


Get the PDF
Previous post:
Christmas in Korea with Esther Julee | 12 Days of Christmas Around the World Day 10
Next Post:
Hole in Wall Box | San Diego Unboxing