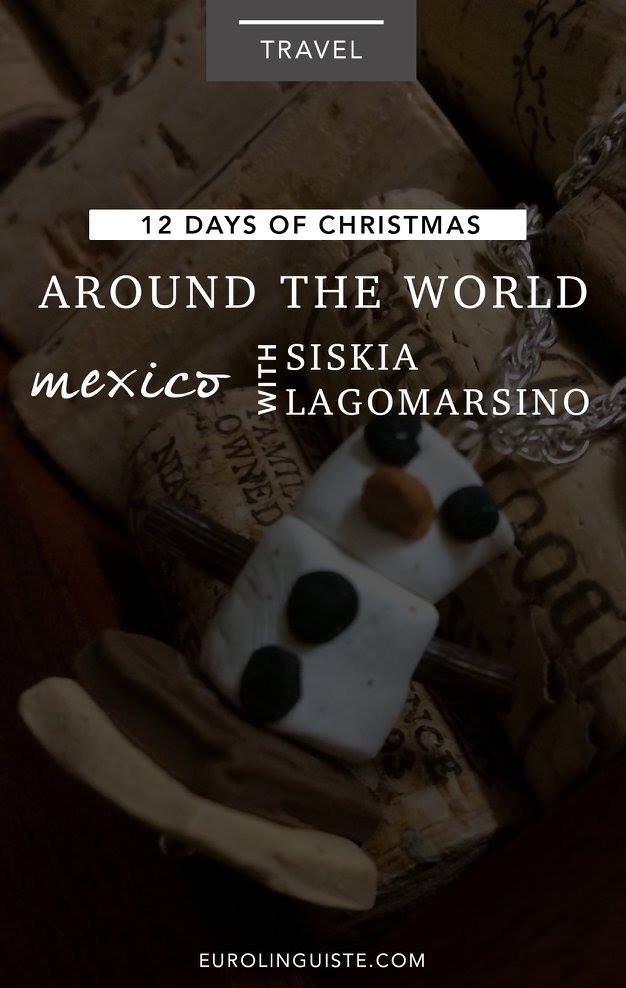 About the Author // Siskia Lagomarsino is a translator and language tutor currently based in Mexico. She is a native English and Spanish speaker who discovered her passion for language learning when she began studying Japanese at the age of 20.

Christmas in Mexico with Siskia Lagomarsino

The way in which Mexicans celebrate Christmas almost always comes as a shock to visitors to this country; although in recent years it has come to closely match the more global, bearded-Santa-and-reindeers theme that we all associate with Christmas, many uniquely Mexican features of Navidad still remain.

Now, when I say “Mexican”, I actually mean “from all over the place”. It may not seem like it, but Mexico’s culture is built on layer upon layer of syncretic creeds and celebrations: believe it or not, living in the midst of this huge cultural hodge-podge makes for some really lively ‘fiestas‘!

But what is ‘Navidad‘ in Mexico, anyway?

If you know a little about how the country now known as Mexico came to be, you may know that before the Spaniards came, there were many tribes there, a lot of which were ruled at one point by a particular tribe called the Mexica (wrongfully known to the world as the Aztecs). The Mexica worshipped many gods, but one could say that their go-to gods were Tlaloc (god of rain) and Huitzilopochtli (god of war and sun).

As it were, Huitzilopochtli was so important to the Mexica that the whole equivalent of a month, called Panquetzaliztli (which roughly runs from December 7 to December 26) was dedicated to him. The Mexica celebrated by decorating their houses, doing sports, dancing, singing, praying… and doing human sacrifices at the end! (Huitzilopochtli was something of a blood-thirsty fellow.)

Obviously, after the Conquest, the Catholic Spanish rulers would have nothing of this, but while spreading the faith they’d already encountered pretty serious resistance from the natives who refused to give up their traditions just like that, so rather than push a whole different creed on the new Mexicans, they took advantage of the fact that their former chief god’s festivities were so close to the traditional Christmas, slipped the Spanish narrative and imagery of Christmas little by little on the native narrative as part of their ultimately successful evangelization campaigns, and ‘la Navidad mexicana‘ was born!

How was Christmas in Mexico celebrated traditionally?

Christmas in Mexico used to be a loooong, colorful engagement, and in some villages it still remains so. One of the oldest Christmas celebrations was the traditional ‘posada‘, originally a Spanish tradition: it is a kind of theatrical procession (and prelude to part-ay!) that involved the local community choosing two people, a Mary and a Joseph, to represent their looking for lodging before Jesus is born, going from home to home until a generous samaritan (also a house picked prior to the posada) allows them to stay; after this, more traditional towns continue the act into an ellaborate offering to a baby Jesus figurine, chanting and praying, but in the larger cities, the host house is usually just meant to gather the community in celebration, clink a glass of Christmas punch or apple wine, and have a neighborly laugh before Christmas Eve, which is more of a family affair. (In a nutshell, it’s a great excuse to get drunk.)

I mentioned the baby Jesus figurine because it’s a very unique trait of Mexican holiday culture: extremely Catholic families all have one (the oldest ones are made of china), and spend sometimes exorbitant amounts of money dressing them up in order to have them ‘spend their birthday’ in style. (As you may imagine, there are even shops where they sell clothes exclusively for these figurines. Google ‘se visten niños Dios‘ sometime—you’ll either have a good laugh or get thoroughly creeped out, depending on what you think of dolls.) Another family tradition related to the image of baby Jesus is the laying of the ‘Nacimiento‘ or nativity scenes, which are miniature scenes of the birth of Jesus usually placed at the feet of the Christmas tree.

Piñatas also appear a lot during the Christmas holidays, typically during the posadas. Although these colorful contraptions, traditionally filled with winter fruit such as sugar cane, guava and tangerines (although nowadays, it’s easier to just put candy in them) are associated with Mexico, the tradition actually came from China (!) via Italy and then Spain.

How do we celebrate Christmas in Mexico nowadays?

The bigger Mexican cities largely resemble the US during the holidays—there’s a frenetic rush of gift-buying, worrying over your kids’ letter to Santa, and wondering how to give a secret Santa gift that won’t make you the joke of the year. Children either will go to bed early or not at all on the 24th, and adults will have worried grimaces just by thinking of getting on the scales.

There is, however, one fundamental difference: in Mexico, it’s a tradition to eat a stuffed turkey on Christmas rather than Thanksgiving. Other delicious traditional Christmas foods are “romeritos”, a stew of romerito sprigs (related to rosemary) cooked with mole sauce and shrimp patties, and “bacalao a la Vizcaina”, a Spanish stew of salted cod fish cooked in tomato sauce and garnished with the spicy chile guero. (Incidentally, both of these are iconic Christmas foods, but they’re also so complex and time demanding that most people don’t actually prepare them themselves, but rather they order them from businesses who do.)