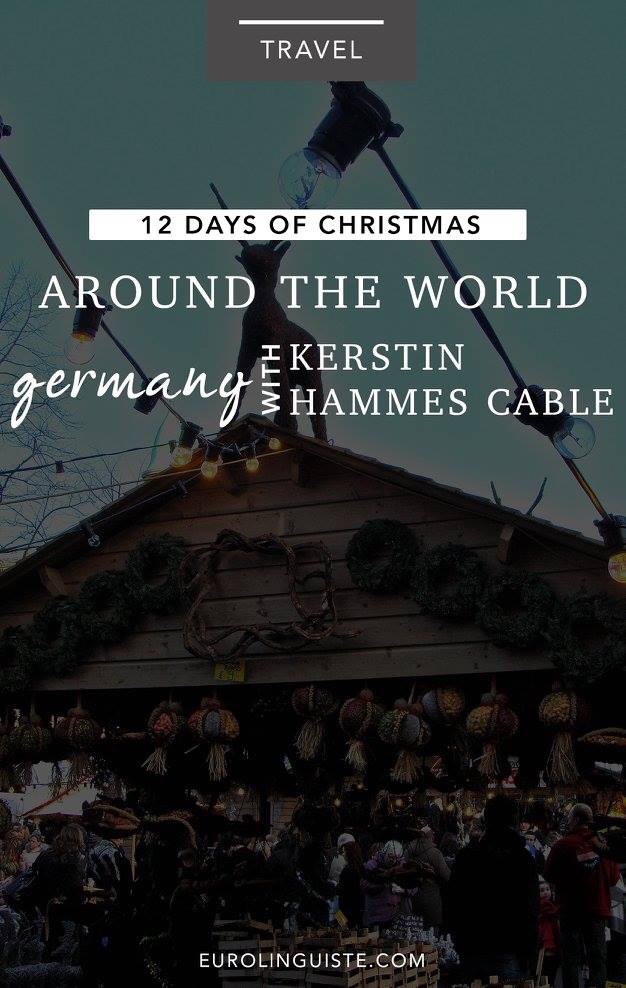 About the Author // Kerstin Hammes Cable is a German native currently living in the UK. She has produced several fantastic courses including Speak Like a German Native and two notable books including Fluency Made Achievable and The Vocab Cookbook. You can learn more about her and her teaching at Fluentlanguage.co.uk.

German Christmas has a head start for food, relaxation and board games with the family. In the German-speaking world, children don’t have to wait long for their presents. First, St Nicholas pays them a visit on Dec 6th to fill their boots with sweets and little surprises. The event at the heart of Christmas is Bescherung (gift giving) on Christmas Eve.

Christmas Day and Boxing Day are known as the “first and second day of Christmas” respectively and often reserved for visiting family and watching repeats on TV. It opens up the most wonderful period of the year known as zwischen den Jahren (between the years) when many people’s homes are quiet and restful before the new year starts.

As a country where Christianity plays a big role in traditions and cultural events, Christmas in Germany has a religious feel. It is regarded as a time of calm reflection, and Germans also observe a bunch of traditions during Advent, the four weeks leading up to the Christmas festival. Many families may read out the story of Joseph and Mary on Christmas Eve, and especially in rural communities it is customary to attend a special church service to mark the occasion.

As a resident of the UK, I’ve long become used to the idea of a traditional Christmas dinner. Brits go for a Turkey dinner with lots of vegetables, stuffing and Yorkshire Puddings. In Germany, Christmas food is just as festive but it’s less mandatory to eat anything specific. The meal on Christmas Eve is traditionally meant to be kept simple and meat-free (meaning fish, not vegetarian fare) to respect that it is in essence a “Saturday”. On Christmas Day, many families dish up a Weihnachtsgans (Christmas goose) with red cabbage and dumplings, but this is not a national obsession.

Our most traditional Christmas foods are the baked sweets such as Lebkuchen (gingerbread) and Plätzchen (Christmas biscuits). As a child, I would spend hours in the kitchen with my mother and grandmothers as we made up to 10 different kinds. The key ingredients you’ll need in your home are flour, sugar, butter, and lots and lots of cinnamon. Visitors on the holidays often bring along bags of their own homemade Plätzchen to add to your own collection.

These Zimtwaffeln (cinnamon wafers) are my absolute favourites. Ideally you'll be making them with a special waffle iron http://www.amazon.de/Syntrox-Germany-Zimtwaffelautomat-Wechselplatten-Zimtwaffeleisen/dp/B005UCI8ZW.
Print Recipe

250g soft butter
250g sugar
4 eggs
40g cinnamon
500g flour
Combine 250g of soft butter, 250g of sugar, 4 eggs, 40g of cinnamon and 500g of flour in a bowl, then knead the dough thoroughly. If you want to add more cinnamon, go for it as this is the main flavour.
Put your dough into the fridge for about 1 hour to rest.
If you have a waffle iron, form small balls from the dough. You’ll be cooking your biscuits in the hot iron. Spray a little oil on the plates and cook the dough balls for 1-3 minutes depending on temperature.
If you have no waffle iron, you can roll out the dough and use a stencil or cookie cutter on them. Bake the biscuits for about 15 minutes in the oven (180 degrees C).