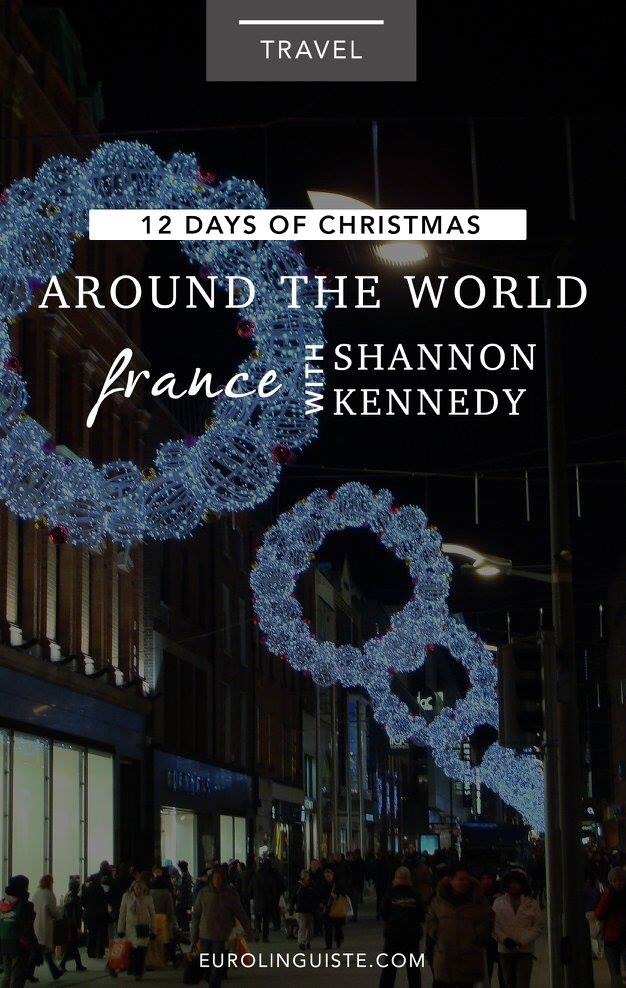 Today is the tenth day of the 12 Days of Christmas Around the World, so the countdown is on! And today, I’d like to share my second (and last) contribution to the series, before I let the other wonderful bloggers take over once more.

In this post, I’d like to talk about Christmas in a country near and dear to my heart – France.

How Christmas Was Celebrated in France in the Past

Christmas in France is known as Noël. According to ChristmasCarnivals.com, Christmas was first celebrated in the 12th century in France. That’s a whole lot of Christmas history!

Less in practice today than it was in the past (due to a variety of reasons), the French nativity scene, or la crêche, played a central part in French holiday tradition. There are quite a few regional varieties that can be seen across France, especially regarding which santons (the clay figurines included as part of the display) are used. The creation of santons soon became an art in and of itself and led to the development of the santonnier profession, the first known of which being Jean-Louis Lagnel.

Before Christmas became a largely commercialized celebration, children would place their shoes in front of the fireplace, hoping Père Noël would fill them with candies, fruits, or gifts. At one point, they would even place carrots in their shoes for Santa’s donkeys (now reindeer). A much healthier alternative to milk and cookies! In some parts of the country this was done on December 6th, the feast day of St. Nicholas, but in others, gifts were given on Christmas Day. This was often something we did at school when I was a kid, but instead, we would set our shoes outside the classroom door and when we went back to get them up, they were filled with sweets.

Prior to the 1960s, gifts in France were often and orange (or something else food related) along with a small gift which (after shoes were no longer the fad) were placed in a stocking. As commercialism and American-influence increased, colorful wrapping paper and the giving of more expensive gifts became more common.

Today, nearly all children in France are familiar with Santa, or Père Noël, but historically, Santa was not one figure, but two. In the past, Père Noël had a counterpart who dealt with the naughty children – Père Fouettard. Depending on where Père Fouettard visited, he either doled out coal or whippings to poorly behaved French children. Père Fouettard has rather interesting origins, but they’re a bit dark, so I’ll let Wikipedia handle the telling.

Another fun fact about Santa in France is that in 1962, a law was passed in France that states that every child who writes to Santa will receive a postcard response.

Did you know that the first Christmas tree is said to have originated in the Alsace region of France in 1521? This means that this iconic Christmas decoration might actually be a French innovation! There are mixed sources, of course, but it is known that le sapin de Noël appeared in Germanic/Alsatian regions during the Renaissance. There are theories that the tradition may be even older than that!

Martial Arts Vocabulary in Korean: How to Talk About Taekwondo in Korean

Midnight Mass, la messe de minuit, is often followed by le réveillion, a long meal with family on Christmas Eve. Depending on where in France le réveillion is taking place, there are a variety of foods that may make their way onto the table including oysters, smoked salmon, escargot, goose, and of course, wine.

La Bûche de Noël, or the Yule Log, is a tradition that is scene across Europe with as many variations and traditions as there are countries and regions that once practiced it. In France, the Yule Log was often from a cherry tree. It was carried into the home and sprinkled with wine on Christmas Eve so that it would smell nice while burning.

When the tradition fell out of practice (around the 1940s), the name was transferred to a dessert made to resemble a small bûche de Noël. Traditionally, these cakes are made from sponge cake and chocolate buttercream, but many variations have emerged and they are all quite delicious!

For the batter:
4 eggs
120 g flour
125 g powdered sugar
1/2 cup strong coffee
salt
For the filling:
3 fresh egg yolks
250 g mascarpone
1 cup cold whipping cream
100 g powdered sugar
6 g gelatin For the topping:
chocolate chips (to taste)
powdered sugar (to taste) Prepare the batter by preheating the oven to 180C. Break the eggs and separate the white from the yolks. Whip the egg whites until they form peaks by adding in a pinch of salt and sugar.
Whisk the egg yolks and add in the egg white mixture. Slowly incorporate the flour.
Pour the batter evenly into a baking sheet lined with parchment paper. Bake for 10 minutes.
Remove the cake from the oven, place a damp towel over the cake and then flip the baking tray over. Remove the tray, then slowly roll the cake using the cloth. Set aside. Preparing the filling:
Allow the gelatin to dissolve in 2 tablespoons of hot water. Whisk the egg yolks along with the powdered sugar and then add in the mascarpone. Add in the cream. Once the gelatin is cooled, add it into the mixture. Preparing the cake:
Remove the cake from the towel and return the cake to the baking tray. Pour the coffee over it evenly.
Spread the filling over the cake evenly and then roll the cake up once more, wrapping it tightly in plastic wrap. Store in the refrigerator for around 8 hours.
When ready to serve, you can decorate the cake with any leftover filling, powdered sugar, and chocolate chips. Adapted from Cuisine et Vins de France