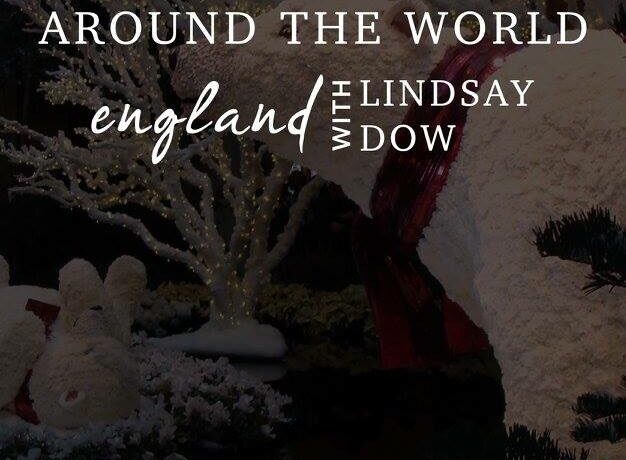 About the Auther // Lindsay Dow is an awesome language learning videoblogger and writer over at Lindsay Does Languages. She is based on the UK and earned her degree in languages from Open University. She currently has a fantastic course on Phrasal Verbs and plans on releasing more courses in the near future.

Hello there! I’m not Shannon. I’m Lindsay and I blog over at Lindsay Does Languages.

Shannon invited me over here today to share a little insight to Christmas time in the UK. I’m so excited to share some of my favourite Christmas traditions with you today as well as some important festive British English words, available as a handy PDF by clicking HERE (Leadbox)

You ready? Welcome to a very British Christmas.

So first things first, I should probably clear up the whole Britain/UK/England thing. Technically our country is called ‘The United Kingdom of Great Britain and Northern Ireland’. At least that’s what it says on my passport.

That mouthful is made up of England, Northern Ireland, Scotland, and Wales. We all have slightly different customs, dialects and accents (and even languages in some cases), and therefore I’m sure there’s some variation in festive traditions across the whole country. Traditions even vary within individual households!

I’m from England and have spent most of my Christmases in England, so the things I mention in this post will be mostly relevant to En-ger-land, to give it its football chant name.

Christmas starts to creep into the shops around the same time as Halloween stuff appears. It starts small, a sparkle of tinsel here and there, a Christmas card or two there, yet every year people swear it gets earlier, it’s too early, and we should blooming well wait until December!

With that in mind, it’s normally around the first week of December you’ll begin to spot decorations going up in (and on) people’s houses.

Advent calendars are popular as a way for children (and big kids, aka, adults) to countdown from the first of December to the big day, which for us is Christmas Day, 25th December.

Christmas Eve, 24th, is a normal working day for some, especially if you work in retail, in which case, it’s probably enough to leave any shop assistant with a ‘Bah Humbug’ taste in their mouth. It’s notoriously a terrible day to go shopping. Last minute shoppers will raid the shelves in search of that top toy that sold out weeks ago. However, in recent years, more and more people have taken to shopping online.

The day after Christmas Day, the 26th, is known as Boxing Day. No, we don’t have a national boxing match. No, we don’t box up our presents to give away throughout the year as birthday presents. No, it has absolutely nothing to do with boxes. In fact, there are some varying stories regarding origins of the term ‘Boxing Day’. Probably the most common is that it’s the day when servants used to receive their ‘Christmas box’.

Nowadays, Boxing Day is for some, preferred to Christmas Day. Less pressure to cook a huge meal and have a perfect day, still some great films on TV, and lots of leftover food from the day before. That said, it’s also a popular shopping day, with post-Christmas sales often starting on Boxing Day.

The food is an important part of Christmas Day for us Brits.

Most households opt for a Turkey Dinner. This includes a roast turkey, roast potatoes, vegetables, gravy, and stuffing.

Sometimes people have a different meat such as goose, chicken, gammon, or salmon. However, some Brits would frown upon the idea of changing up the meat!

As for the specifics of the vegetables, this is where people really vary. Commonly, brussels sprouts and roast parsnips are included. Although no-one seems to actually like brussels sprouts, they are pretty much compulsory. It’s a bit weird.

There’s also some interesting bits that make their way onto the plate. Pigs in blankets and devils on horseback to name just two.

Pigs in blankets are little sausages wrapped in bacon and devils or horseback are dates or prunes stuffed with nuts or mango chutney and wrapped in bacon. We apparently love bacon.

There’s one more thing that isn’t edible but will always make an appearance on a Christmas dinner table: Christmas crackers.

Christmas crackers are a tube with a snap (aka teeny tiny firework!) inside. You pull a cracker with the person opposite or next to you at the table to reveal the cheap plastic gift, paper hat and joke inside. Whoever ends up with the biggest end of the cracker wins the prize!

Last year I hosted Christmas for the first time and made my own crackers – language themed of course! Each cracker had ‘Merry Christmas’ inside in a different language as well as a naff joke and a little toy. It was a lot of fun to make custom crackers!

There’s no set dessert for Christmas dinner, but you might find a Yule log, a Christmas pudding, a cheese board, or mince pies to name just a few. (Psst! Shannon’s got a recipe for mince pies down below! LEADBOX?)

A Yule log is basically a chocolate cake in a long round shape (like a log!). The best ones are covered in the most delicious chocolate fudgey ganachey yumminess. All totally legit words there by the way.

A Christmas pudding is a round dessert filled with dried fruit and spices. Sometimes it’s covered in alcohol and set on fire at the dinner table…yeah…

A cheese board is my least favourite. I have a very sweet tooth so if dessert time comes around and someone pulls out a cheese board my heart will sink a little bit. Ok, a lot. However, it’s loved by many. You’re normally presented with a range of cheeses and crackers, maybe some chutneys or grapes too.

Mince pies. Mince pies are the Marmite of the British Christmas. Some people love them, some people hate them. Personally, I used to hate them but now I love them. I won’t give away too much about what they actually are because Shannon has made and taste tested some mince pies and blogged the recipe for you. Click here (LEADBOX?) to get that recipe.

TV has always been a crucial part of a very British Christmas. From classic films (when I was younger, it was the only chance I had to see E.T every year) to Christmas specials of comedy shows (I’m looking at you The Office and The Royale Family), to festive adverts (Coca-Cola truck, anyone?). The latest trend is tearjerking adverts. In particular? John Lewis.

Personally, I’m not a big fan of this year’s Man on The Moon. (Although budget supermarket Aldi’s response is brilliant.) Last year’s advert with Monty The Penguin is my favourite.

Either way, the trend has caught on and now Sainsbury’s, a British supermarket chain, is getting in on the action with an animated cat. I’m pretty sure that we’ll be seeing more and more brands jumping on the bandwagon as the years go on. Watch this space.

You may have already heard about The Queen’s Speech.

Nothing spectacular happens./ The Queen just talks about the year, the good, and the bad, and shares some wishes for the next year.

A notable thing here is the existence of the Channel 4 Alternative Christmas Message. Previously done by Edward Snowden, the president of Iran, and…Marge Simpson. It’s an eclectic list.

Ahh! The Snowman is the best thing on television at Christmas. There’s no speech, so whatever stage you are at with your English, you can enjoy this part of British Christmas culture.

It’s a beautiful and classic animation based on the book by Raymond Briggs.

What’s more, a couple of years ago, The Snowman and The Snowdog was released. We’re still talking tearjerkers here, guys. Tissues at the ready for the original trailer.

I don’t know about you but for me, Christmas Day itself deserves to be spent cosy inside without even thinking of leaving the house. Hot chocolate and slippers optional.

However, there are a couple of occasions where going out around Christmas time might just be worth it, at least in the name of tradition.

Towns and cities across the country will decorate their centres with lights and trees galore from about late November/early December.

Bigger cities (aka London) get the likes of Kylie Minogue to turn their lights on (seriously, that happened this year.)

But smaller towns and cities are often left with those not-so-famous faces from a few years back to do the honours.

Speaking of “who’s that?!” celebrities, pantomimes are big business in the UK.

When I was younger, I went every single year to the ‘panto’, as it’s affectionately known.

The stories vary (but not much) from Aladdin to Cinderella and from Peter Pan back to Aladdin. The actors vary from reality TV stars to 90s pop singers and from people whose names sound vaguely familiar back to reality TV starts again.

However, the action doesn’t change much.

There’ll always be a man dressed as a woman, two people dressed as a donkey, and an “it’s behind you!” routine.

All sarcasm aside, it is good fun and I always enjoyed going to the panto as a child.

1 pkg pastry dough
1 cup of diced and cooked beef
4 cups of diced apples
1 cup of raisons
1/4 cup of sweet pickle juice
1/4 cup of pineapple juice
1 orange peeled and diced
1 tsp salt
1/2 tsp ground clove
1 tsp cinnamon
1 tsp nutmeg
1.5 cups sugar
1 cup beef broth
1/2 cup molasses
Combine all ingredients (except pastry dough) in a bowl and store in refrigerator overnight.
Preheat oven to 400F. Roll out pastry dough and cut into squares about 3″x3″. Oil a cupcake tray and place one dough square into each section. Fill each with a large spoonful of filling. Bake for about 20 minutes or until pastry is golden brown. Adapted from All Recipes

Wherever you are in the world, if you celebrate Christmas, I hope you have a wonderful festive season full of love, mince pies, and emotional Christmas TV adverts. Enjoy!

Have you ever spend Christmas in the UK? What did you think? What was the biggest surprise from this post? Share in the comments!