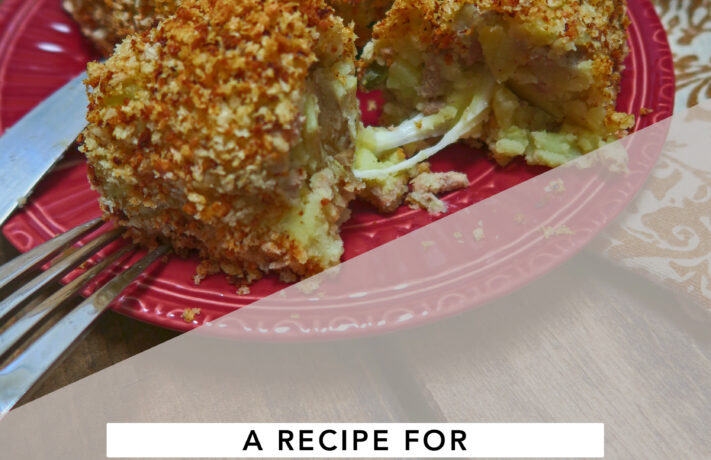 I had my first croquettes, or croquetas, while we were in Barcelona, Spain. Since, they’ve been on my list of recipes I’d love to try out at home and recently, I finally had the opportunity (and ingredients on hand) to try it out.

The croquetas I had in Spain were made with Iberian ham, manchego cheese, and dough, but M doesn’t eat ham, and I wanted to use ingredients that I could easily find in the US. I’d still like to try making the traditional croquetas recipe, one day, but I’ll save it for a family gathering where I know others can enjoy them rather than making them all for myself (since I’m the only one who will eat them at home).

Croquettes (rather than croquetas) are typically made with mashed potatoes and a ground meat of sorts, but they can also contain shellfish, vegetables, cheese, or fish (so technically, this recipe for accras de morue might also fall into the “croquette” category). They can be shaped as cylinders or discs and are typically fried.

Croquettes are a popular dish, probably because most fried foods are delicious, and variations exist all over the world. They are called aloo tikki in India, kroket in Indonesia, コロッケ (korokke in Japan), 고로케 (goroke) in Korea, kroketten in Germany, croquettes in France (where they were first described in a recipe from 1691), crocchette in Italy, and котлета рубленная (kotlyeta rublyennaya) in Russia.

To make the dish my own, I decided to coat the croquettes with cajun panko (M’s favourite right now), add in a few jalapeños, plus some mozzarella, and bake them rather than fry them. And they were delicious. You can eat them plain or dip them in almost any of your favorite sauces.

2 lbs potatoes
1 large onion
3 tbsp olive or vegetable oil
1 lb ground beef (or turkey if you prefer)
2 jalapeños, chopped
1 tsp freshly ground black pepper
1 tsp salt
1 cup panko
1 tbsp cajun seasoning
1 tbsp butter
2 large eggs
½ cup (60 g) all-purpose flour
3 mozzarella sticks each divided into 4 pieces (12 pieces total)
Fill a large pot with water and place on stove until boiling. Cut the potatoes into thirds and place into the pot, ensuring that potatoes are completely submerged in water. Cook the potatoes until a fork goes through easily (about 20 minutes).
While cooking the potatoes, finely dice the onion and the jalapenos.
In a large pan, heat 1 tbsp or olive or vegetable oil on medium high heat and sauté the onion until they become transparent in color. Then add the jalapenos and meat and cook until the meat is no longer pink.
Season the meat with ½ tsp. freshly ground black pepper and ½ tsp. salt. Remove from heat and set aside.
In a separate pan, pour 2 tbsp of oil and add in the panko. Heat over low heat until golden brown. Transfer the panko into a small bowl and allow it to cool. Add in cajun seasoning and mix well.
Check on potatoes. When a fork goes through the potatoes easily, transfer the potatoes to a strainer to drain water and then place potatoes in a large bowl.
Mash the potatoes. Season with ½ tsp. freshly ground black pepper, ½ tsp. salt, and 1 Tbsp. butter and mix the seasoning well into the potatoes. Add the meat into the mashed potatoes and combine well.
Preheat the oven to 400F (204C).
While the mixture is still warm, make thick oval patties, press your thumb into the center to create an indent for the mozzarella. Place cheese into patty and then fold the potato/meat patty over the cheese so that they are cylinder shaped.
Coat the patties with flour, patting off any excess. Then coat them egg, then finally panko. Line them on an oiled baking tray.
Serve warm.
Previous post:
My Favorite Korean Language Resources (So Far) Next Post:
A Review of the Making Out In… Phrasebook Series from Tuttle