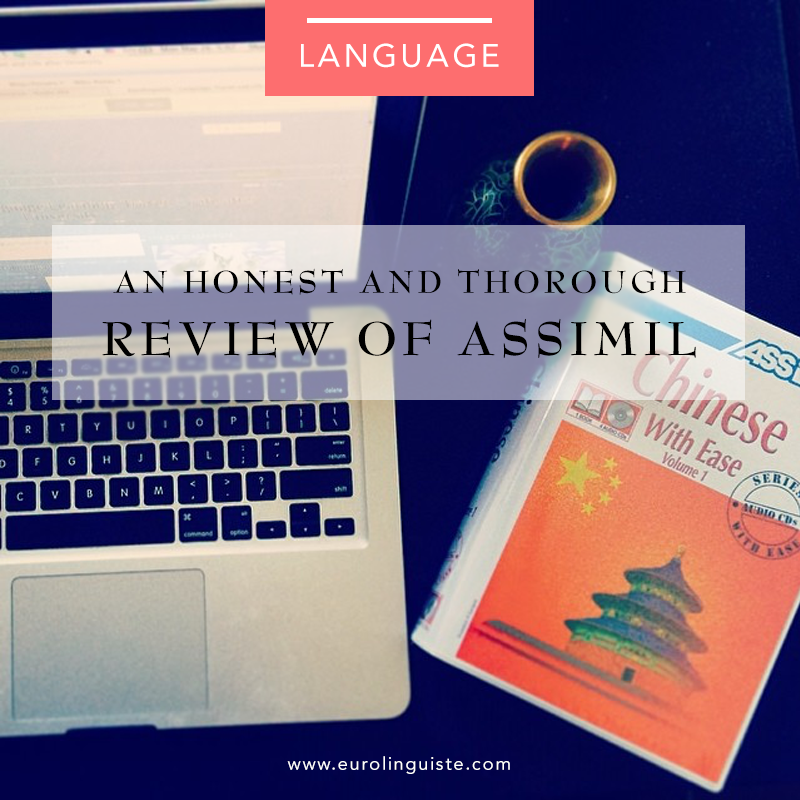 A short time ago, I wrote a post summarizing the eight language learning resources that I use on a regular basis. Although I briefly mentioned the reason why I use these resources, how I use them and their approximate costs, I wanted to spend the time to write out thorough reviews of each of the eight resources as well.

Before I get started with today’s in-depth post, I want to note that I write reviews for various reasons. Sometimes it’s because I’ve been asked to test out and review a resource, but other times its because I’ve found something that really works for me and I want to share it with you in the hopes that it will help your language learning as much as it’s helped mine.

This is one of those reviews.

Founded by Alphonse Chérel in 1929, Assimil is a French publishing company that specializes in foreign language materials. Their first book, “Anglais Sans Peine” [English with Ease], not only served as their entrance into the language learning community, but as the debut of what would become their most popular series.

The Assimil method focuses on teaching students both grammar and vocabulary in a more “organic” context by presenting them as full sentences via text and audio. The series typically comes with either 50 or 100 lessons (depending on the version you own) with lesson 51 more actively engaging the student with more advanced exercises.

The books are available both in and for a variety of languages, but the French based texts have the widest selection of learning materials. This makes Assimil an even greater asset for French-speaking language learners, but German, English, Dutch, Arabic, Hungarian, Italian, Spanish, Polish, Russian, et al. speakers can enjoy select publications as well.

My Experience with Assimil

At this point I have worked with the Assimil “With Ease” series in two languages and I am getting ready to embark on my third venture with them. I’ve also used their phrasebooks and games, but I’ll talk about those in their own posts.

I started using Assimil, if I’m totally honest, because it was one of the few resources that I could find for Croatian. When I started out, I had purchased another textbook, but I didn’t particularly like it and was desperate for something else. Finding Croatian learning materials for English speakers proved to be surprisingly difficult, and so, I decided to try another tactic. I began searching Amazon for books to help me learn “le croate” rather than “Croatian”, hoping that their might be something more available for French speakers.

And that’s how I discovered Assimil.

I had heard other language learners mention the name, Assimil, but it wasn’t something that I had run across in local book stores, so I was largely unfamiliar with it. Thankfully, I decided to give it a go, and it was not long after that I was tucked away in a corner at my desk with “Le Croate Sans Peine” cracked open and my headphones on with the audio tracks accompanying my study.

It has since become one of my “must have” learning tools and is one of the first purchases I make when taking up a new language.

The majority of language learning textbooks present material in a similar way. They give you a list of vocabulary (usually something about the train station, school, the airport, or something else travel related), a quick overview of some grammatical aspect of the language, and then throw a bunch of exercises at you. From book to book, the material is pretty uniform and it’s often boring if not tedious to work through.

Assimil, on the other hand, challenges and engages the student from the start. Rather than present individual vocabulary and a separate grammar overview, Assimil offers a brief conversation with explanations and exercises to help students actually learn material in a more authentic way. The sentences and flow of the conversation are sometimes a little staged, but they aren’t teaching you useless phrases like “the snake drank my milk” or “my car has a cassette player.” To my knowledge, they also frequently update their books to keep up with our ever-evolving languages to ensure learners are investing into a useful and current resource.

I also love how Assimil connects the written language with the spoken language. It isn’t like Pimsleur (which is a stand alone audio course) and it isn’t like your typical, run-of-the-mill textbook which lacks the audio portion. As a learner, you can choose how you use the materials Assimil offers. You can listen to the audio on its own, work with the book alone, or study with both simultaneously. There’s a lot of flexibility that exists within their system, and for someone like me who has a pretty inconsistent study schedule, I really appreciate that I can choose to study with Assimil in a way that’s pretty much always convenient for me.

I can’t listen to audio? That’s cool, I can read through the book. Can’t read because I’m driving? Then I’ll just listen to the audio. I only have 10 minutes to study? I’ll do a quick run through of a lesson with the book and audio and go back to look at it more in depth later (unless it’s one I’m reviewing).

Another thing that I like about Assimil is that it forces you to just dive into your new language headfirst. They don’t coddle you and start out slow. They start out at a decent pace and then go from there. It’s refreshing. As someone that’s done this “start a new language from scratch” thing a few times now, it’s nice feel like I’m skipping ahead a little when I pick up a new language.

One of the most advantageous features of Assimil for language learners is that they offer phrasebooks in a variety of dialects (something not widely available from other publishers). For French you can focus in on Chmiti, Marsellais, or Provençal. For Arabic you can learn Moroccan, Tunisian, Algerian, Lebanese, or Egyptian. For German you can learn Alemannic or Standard German. And so on.

They also have a nice selection of books for harder to find languages like Afrikaans, Icelandic, and Maori, and regional languages like Breton, Alsatian, Auvergnat, and Gascon. And they even have publications for Sanskrit, Ancient Greek, Egyptian Hieroglyphics, and Latin. In my opinion, especially as someone who obsessed over Mayan hieroglyphs and Egyptian hieroglyphs in middle school, that’s pretty darn cool.

The only thing I might mention here is that learners don’t have as many options through Assimil if they don’t speak French. Since the majority of the resources are available in French only (particularly the guides on dialects and rarer languages), some learners might miss out on using this fantastic resource.

This, of course, isn’t a permanent downside for Assimil. As they grow, they can always work towards making more of their publications available in other languages based on demand.

How I use Assimil:

So let’s talk about price.

The Assimil books are anywhere from $40-200 depending on which version you get.  The standard “With Ease” or “Sans Peine” series runs between $60-80. It’s definitely not the most expensive language learning resource out on the market, but it is definitely a purchase worth spending some time thinking about. In my opinion, it’s absolutely worth the price. It’s a high quality, extremely effective method that can really help you progress through a new language at a decent pace.

Assimil is a really great resource for learners looking to take an active approach to their language learning. You’ll definitely get a lot out of these books if you’re willing to put the work in to using them to their full potential. Check out what Assimil has to offer o Amazon.

Please note that while Assimil did not ask me to write this review, if you click any of the links to Amazon to purchase Assimil products in this post, I make a small commission and you help me keep this site up and running at no additional cost to you.