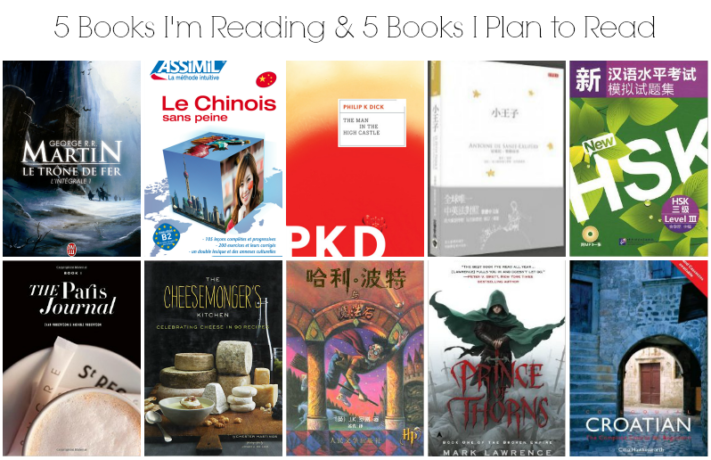 This month one of my goals was to catch up on reading. To be completely honest, I haven’t been reading as much as I had intended, but I am still making a little bit more of an effort to get a little more reading in.

I think one of my biggest problems is the fact that I have a tendency to read a handful of different books at the same time. I would absolutely get through my books more quickly if I focused on one from start to finish but I never seem to be able to manage it.

1. Le Trone de Fer // I have started to read in French more and more lately even though French-language books can be hard to find in the US. When we went to France this past year I bought close to 10 books at the local book store to bring back to the US including the first three books in the Game of Thrones series. I definitely plan on doing the same when we go back out to visit family this upcoming year.

2. Assimil Le Chinois sans Peine // I used Assimil to study Croatian and I really enjoyed their approach so when I began studying Chinese, it was one of the first things I bought. The lessons are relatively short and easily digestible. They make a nice addition to my daily learning routine.

3. The Man in the High Castle // M bought me this book for my birthday way back in September, but I only just started reading it this week. It’s a really interesting alternative history book by Philip K Dick about what the world would have been like if the Axis Powers had won the Second World War. I recently read a collection of his science fiction short stories and this was the next logical step in reading his work.

4. Le Petit Prince // I could not believe my luck when I discovered this three language edition of Le Petit Prince. It was released in Taiwan but I was able to purchase it on Amazon. I love dual-language books (where the book is in two languages side by side) and this edition takes it one step further. This will be the third time I’ve read this book, but it’s a classic and it deserves to be read more than once. By the way, if you didn’t know, they are releasing a new movie adaptation in 2015. I am so excited! I included the trailer below in case you haven’t seen it yet.

5. Stimulated Tests of the New Chinese Proficiency Test HSK (HSK Level 3) // A hint as to one of my goals for the next year.

2. The Cheesemongers Kitchen: Celebrating Cheese in 90 Recipes // My mother got me this book for Christmas probably two years ago and I still haven’t read it because I’m terrible! I even bought her a French cheese book the last time we were in Paris (which was far less than two years ago) and I even read that before getting to this one. This book will no longer go ignored! I mean to try out that Humbolt Fog Puff Pastry Recipe!

3. Harry Potter and the Philosopher’s Stone (Simplified Chinese Text) // Because it’s obviously not enough to have read it in English and French.

4. Prince of Thorns // The lovely Elyse of GreenEllephant got me this book back in June for our snail mail exchange. I didn’t start reading it because I was in the middle of finishing another series and was not ready to start a new one. I am *this* close to finishing that series so I plan on starting this one next. Thank you again Elyse for the book! I really look forward to reading it.

5. Colloquial Croatian // I am not a super huge fan of the Croatian language learning book (since I’ve finished Assimil I’ve moved onto something a little more complex and grammar-oriented) that I’ve been using and so I’m looking to try out something else. I’ve heard good things about the Colloquial series and so I’m hoping to get around to checking it out in the near future.